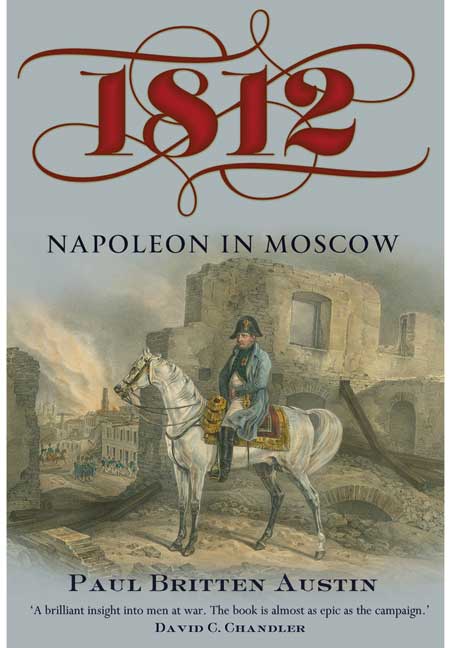 Click here for help on how to download our eBooks
Add to Basket
Add to Wishlist
You'll be £4.99 closer to your next £10.00 credit when you purchase 1812: Napoleon in Moscow. What's this?
Need a currency converter? Check XE.com for live rates

At the gates of Moscow, Napoleon's Grand Army prepares to enter in triumphal procession. But what it finds is a city abandoned by its inhabitants – save only the men who emerge to fan the flames as incendiary fuses hidden throughout the empty buildings of Moscow set the city alight. For three days Moscow burned, while looters dodged the fires to plunder and pillage. And so begins 1812: Napoleon in Moscow, Paul Britten Austin's atmospheric second volume in his acclaimed trilogy on Napoleon's catastrophic invasion of Russia.

After the fires died down the army settled in the ruins of Moscow; for five weeks Napoleon waited at the Kremlin, expecting his 'brother the Tsar' in St Petersburg to capitulate and make peace, while in fact the Russian Army was gathering its strength. At the same time Murat's cavalry, the advance guard, was encamped in dreadful conditions three days' march away at Winkowo, where it was being starved to death. When Napoleon eventually realized the futility of his plans and prepared to leave Moscow, his advance guard was surprised by a Russian attack. The most astounding exodus in modern times ensued.

1812: Napoleon in Moscow follows on from the brilliant 1812: The March on Moscow, which took Napoleon's army across Europe to the great city. Paul Britten Austin brings this next phase of the epic campaign to life with characteristic verve. Drawing on hundreds of eyewitness accounts by French and allied soldiers of Napoleon's army, this brilliant study recreates this disastrous military campaign in all its death and glory.

As featured in bibliography for article 'Napoleon en Moscu'

For those who enjoy firsthand accounts, interesting factoids, and martial color this book is certainly a must.

I would highly recommend this book and would consider it a must to those who have read and enjoyed his previous book of 1812 The March on Moscow.

Almost as epic as the campaign and a masterpiece.

This is the second part of an acclaimed trilogy accounting for Napoleon Bonaparte's ill-fated Russian campaign of 1812. It begins in the aftermath of the bloody, inconclusive Battle of Borodino and Napoleon's entry into Moscow, and it follows the gradual unraveling of his strategy due to the refusal of the Tsar to surrender, the onset of winter, and the return of the Russian army at Winkowo, setting in motion the withdrawal of the Grande Arm馥 in what would become a decisive rout. Paul Britten Austin brilliantly describes events in his unique, almost drama-documentary style, drawing upon in excess of a hundred accounts from all quarters of Napoleon's forces. These have been edited and sewn together for the sake of a continuous narrative, but not particularly challenged in their factual accuracy or balance, and as such the book takes on the appearance of a series of contemporary despatches from the front.

This account of the 1812 campaign is like no other in the English language. Austin has combined descriptive prose with quotes from primary sources to produce a readable account... By using present tense he brilliantly combines his own prose with extracts from memoirs and letters into a story-like telling of the history that transports the reader back two hundred years.

This study is a must. Whether the single-volume version or the more desirable three separate books, these are 'keepers' that belong in the personal library of any Napoleonic enthusiast.

Britten Austin spent decades reading memoirs, letters and diaries written by those who took part in Napoleon's most fatal adventure. He presents these extracts from within a narrative of the campaign as the soldier saw it. The heat of the summer, the vast distances, the elusive foe and the bloody battle of Borodino. Then the awe of Moscow, the horror of the fire and the onset of cold weather...This is a moving story that captures the spirit and drama of the times and makes for an unforgettable and haunting trilogy.

The content is well researched and appropriately selected giving real insights into the French in Moscow. The real quality of the book is that we get to see the big event from many personal perspectives.

This is a very high quality piece of work, and provides an invaluable account of an often-overlooked period in the disastrous invasion of Russia, but a period in which the quality of the French army began to decline and winter crept every closer. As with the first of the three, this entry in Britten Austin's trilogy comes highly recommended.

Drawing on hundreds of eyewitness account by French and allied soldiers of Napoleon's army, this brilliant study recreates this disastrous military campaign in all its death and glory.

Heralded as a classic . . . The text is enriched with first-hand accounts which bring the whole narrative to life with an air of stark realism . . . Britten Austin’s trilogy truly ranks as a masterpiece