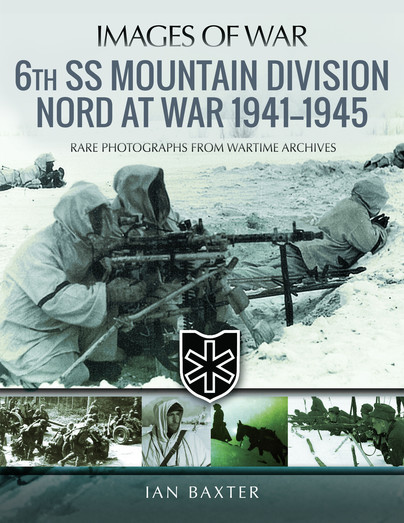 Click here for help on how to download our eBooks
Add to Basket
Add to Wishlist
You'll be £4.99 closer to your next £10.00 credit when you purchase 6th SS Mountain Division Nord at War 1941–1945. What's this?
Need a currency converter? Check XE.com for live rates

Drawing on a superb collection of rare and unpublished photographs the 6th SS Mountain Division Nord 1941 - 1945 is the 6th book in the Waffen-SS Images of War Series compiled by Ian Baxter. The book tells the story of the 6th SS Mountain Division Nord, which was formed in February 1941 as SS Kampfgruppe Nord (SS Battle Group North). The Division was the only Waffen-SS unit to fight in the Arctic Circle when it was stationed in Finland and northern Russia between June and November 1941. It fought in Karelia until the Moscow Armistice in September 1944, at which point it left Finland. It suffered heavy losses in the Operation Nordwind in January 1945 and in early April 1945, the division was destroyed by the US forces near Budingen, Germany.

Along with plenty of text, it's a great value look at the role they played in WWII.

The 6th SS Mountain Division Nord were the only unit of the Waffen SS to fight inside the Arctic Circle, and so much of this book concerns their activities in Finland where they encountered a very different type of war to that experienced on the rest of the Eastern Front. The book contains a broad array of excellent and atmospheric photographs, particularly the large number of those which chronicle their activities during the winter months, where they are seen patrolling those vast swathes of wilderness which were inaccessible to trains and motor transport, and so relied heavily on ski troops with horse-drawn sledges. As with all books in the Images of War series, the large photographs and detailed captions span a diverse range of subjects, clearly showing uniforms and equipment as well as the organisation of defensive positions, including the use of igloos to protect the troops from the elements. Before closing with an order of battle and notes on winter uniforms, the final pages deal with the transfer of the Division to Germany and its part in the failed Nordwind offensive of January 1945, and then the final months of the war which led to its destruction.

Ian Baxter together with Pen and Sword have produced a very professional history as described above. If you are a collector of this sort of thing you will be very satisfied. The original photographs are stunning and the text is very enlightening.

The main value of this book to me however remains in the many photos providing ideas for dioramas to build in our 1;35 scale modeling hobby, with an emphasis on the before and after battle scenes. Bivouacs, ruined buildings, resupply activities, broken and bogged down vehicles, transport, river crossings, travel….. it is all there !

I would highly recommend this volume of the Images of War series to those who have already become regulars and also to those who might be new to the series. It is a good combination of written material supported by brilliant period photographs in the harsh un-forgiving world of winter warfare. The coverage of the Nord Division would be a great addition to every Second World War library.

For military historians this is an interesting one, and for modellers lots of uniform detail and diorama ideas.

Most of the images are interesting and probably new to the vast majority of readers.