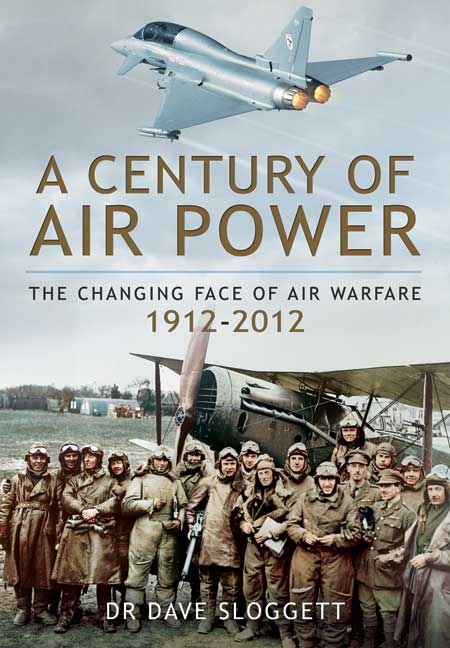 A Century of Air Power (Kindle)

Click here for help on how to download our eBooks
Add to Basket
Add to Wishlist
You'll be £4.99 closer to your next £10.00 credit when you purchase A Century of Air Power. What's this?
Need a currency converter? Check XE.com for live rates

No other technical development since the introduction of gunpowder has had as great an influence on warfare as the aircraft. From its early beginnings as simply a means of aerial reconnaissance to its utter supremacy on the battlefield, the aircraft has evolved into the most versatile and precise killing machine known to man.

In this wide-ranging and comprehensive study, David Sloggett, an internationally-respected defence analyst, investigates the changing role and increasing significance of air power over the course of the previous 100 years. This is accomplished by detailing every major conflict during that period including not only the two world wars and the recent conflicts in the Middle East but also the Korean War, the Cuban Missile Crisis, the Falklands War and Russian use of air power in Afghanistan. Air power's role in Malaya, Oman, Kenya and in Northern Ireland is also explained.

A Century of Air Power is the most important study of the use of military aircraft ever undertaken and as such provides valuable lessons for the future – not only for the commanders who have to apply these all-powerful weapons but also for the politicians who have to determine its use.

A complete overview of the use of military air power over the past 100 years. Includes lots of interesting background information and analysis.

Dr Sloggett makes many telling and thoughtful observations about Air Power and overall this is a significant addition to the study of the subject, including pointers as to where Air Power is going in future. The book makes a good primer for students of Air Power's evolution and skillfully prods the reader into thinking analytically about the subject - recommended.

“An exciting new book on the use of aircraft in warfare.”
“Wide-ranging and comprehensive.”

A Century of Air Power follows his first book... and he was honoured to have its forward written by the head of the RAF, Air Chief Marshal Sir Stephen Dalton.

Isle of Wight County Press/Weekender - Behind the news - Richard Wright

A Century of Airpower is not just a standard account of the development of aerial warfare over the last hundred years, it is an important and thought-provoking study of the past and what the future is likely to hold.

Dave Sloggett explains in his short, yet meticulous analysis of air-power over the past century. Dr Sloggett is eminently qualified to tell the story: he has spent more than 40 years as an adviser to the British military, as well as having worked on the development of defence command-and-control systems. He is also an acknowledged expert on the timely and controversial subject of unmanned aircraftOne of the book’s most compelling chapters deals with air-to-air case studies. The role of aerial combat has changed almost as fast as the technological advances of the military aircraft that carry it out.

I came to this book, frankly, knowing very little about military aviation but came away with a vastly expanded knowledge of the subject. The author provides a thorough and comprehensive survey of air power in all its different forms, astutely organising each chapter by theme rather than the less compelling sequential historical perspective. The result is a detailed, engrossing account of all aspects of military aviation over the previous century, packed full of facts, anecdotes and informed comment, including a contemporary discussion of the role of air power in Syria. The generous number of black-and-white plates of military aircraft spanning the decades also adds a classy touch. I think it would be difficult to find another book that covered this range in such detail and yet remains accessible to the general reader. Masterful, engaging and informative. Recommended.

Probably the most important book you will read.

In this book - A Century of Air Power, Dr Sloggett provides a first-class analysis of the many varied, challenging and innovative uses to which air minded commanders have put this third dimensional capability in the last 100 years. He ably and lucidly describes why and in what ways, Air Power, commanded and controlled by experienced professionals, has fundamentally changed the nature of warfare and combat operations more broadly on the land, at sea and in the air. In this book, Dr Sloggett, has, yet again, demonstrated his mastery of analysis, synthesis and the ability to describe insightfully and effectively the use of air power. He does so clearly, dispassionately, but in a most readable style. He is to be congratulated on bringing the reader a comprehensive, thoughtful and incisive account of the First Century of Air Power and I commend it to you. The last 100 years has yielded many challenges in the air, innovations and lessons - mostly hard won - and many brave and talented people have given their lives to the development of modern air power. Capturing all of this in such an effective work is no mean achievement. True to his character and his background Sloggett presents the facts, the issues and some deductions, but leaves the reader to draw the necessary conclusions.