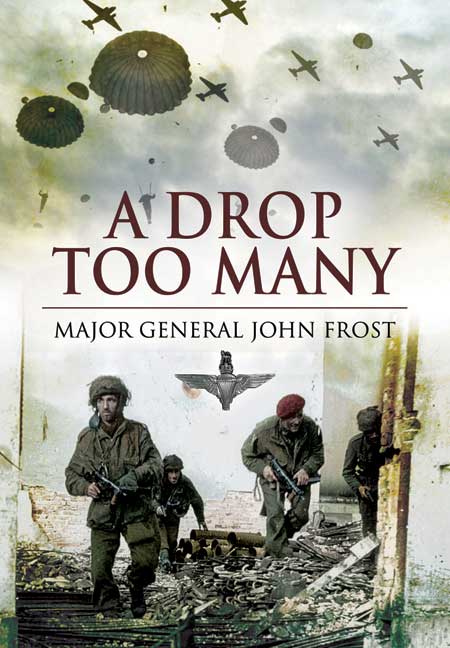 A Drop too Many (Kindle)

Click here for help on how to download our eBooks
Add to Basket
Add to Wishlist
You'll be £4.99 closer to your next £10.00 credit when you purchase A Drop too Many. What's this?
Need a currency converter? Check XE.com for live rates

No-one who reads of the Battle of Arnhem can fail to be inspired by 2nd Battalion The Parachute Regiment's heroic defence of the north end of the Rhine road bridge - 'The Bridge Too Far' - for four nights and three days. John Frost's inspiring leadership as their Commanding Officer was a major factor in the battle, which is now remembered as a legendary feat of arms.

A Drop Too Many, Major-General Frost's war memoir, starts with his service in the Iraq Levies before he became one of the first British paratroopers. In this superb book, he describes the major airborne operations which he took part in, namely Bruneval, Tunisia, Sicily, Italy and Arnhem, where he and many of his men were captured. He goes on to tell of his experiences as a POW and the reconstruction of his Battalion after the German surrender. Written with modesty and humour, A Drop Too Many paints the definitive picture of what it meant to be a member of the airborne elite in wartime told by one of 'The Greats'.

The Battle of Arnhem

On 17 September 1944, Operation Market Garden - the greatest airbone assault of World War II - began. British, US and Polish airborne troops made a gallant attempt to seize and hold bridges across the Lower Rhine in Holland as a springboard for crossing into Germany.