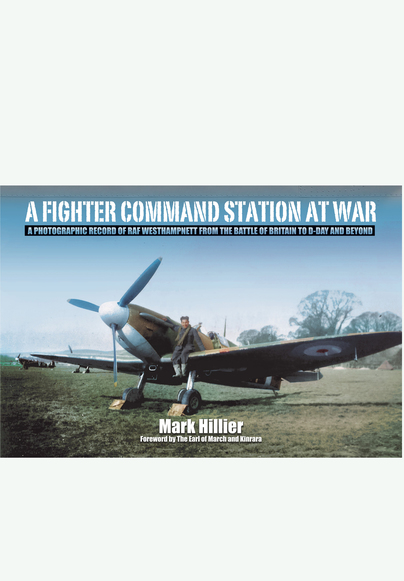 Click here for help on how to download our eBooks
Add to Basket
Add to Wishlist
You'll be £4.99 closer to your next £10.00 credit when you purchase A Fighter Command Station at War. What's this?
Need a currency converter? Check XE.com for live rates

Situated close to the South Coast, on flat land to the north of Chichester in West Sussex, lies Goodwood Aerodrome. This pleasant rural airfield was once home to squadrons of Hurricanes, Spitfires and later Typhoons. RAF Westhampnett was at the forefront of the Battle of Britain as a satellite to the Sector (or controlling) Station of RAF Tangmere, part of 11 Group, which bore the brunt of the struggle for Britain's survival in 1940.

It became the base of Wing Commander Douglas Bader until he was shot down over France, as Fighter Command took the war to the enemy with operational sweeps over Occupied Europe. Those operations included the infamous Channel Dash which saw the escape of the German warships Scharnhorst and Gneisenau, and the Dieppe raid of 1942 which involved the largest aerial battle of the war up to that date. Westhampnett's squadrons also supported the D-Day landings and the subsequent Battle of Normandy.

Packed with the largest collection of photographs of this airfield ever compiled, this illustrated publication provides a detailed history of the fighting as seen through the eyes of many of the pilots and ground crew. RAF Westhampnett brings to life those exciting but dangerous days of the Second World War through the words and photographs of those who were there.

As it says on the jacket, this is a photographic record of an RAF fighter station from the Battle of Britain to D-Day and beyond. It is however also accompanied by some well-written text that probably amounts to almost 50% of the page space. An emotive record of the young men and their machines operating from RAF Westhampnett. Will appeal strongly to all those followers of WWII history and the air war in Europe, recommended.

Mark Hillier has gathered for this book a beautiful collection of pictures. The pictures do not only show great airplanes but also a lot of beautiful faces of fantastic people. Faces that smile, faces that are earnest and especially also faces that show commitment and companionship. The author has orientated himself broadly and engrossed in the history of the field and especially also in the history of the people on the pictures. This gives interesting explanations and texts about missions, the daily life, accidents, etc. Impressive is the list of squadrons that were stationed on the field.

Mark Hillier has brought Goodwood Aerodrome and especially those who fought from this base, a beautiful tribute with this book bursting with interesting historical details.

'Packed with more than 250 wartime photographs, and accompanied by a detailed history of the fighting as seen through the eyes of many of the surviving pilots and groundcrew, this wonderful book not only brings to life those exciting but dangerous days, but helps to ensure the airfield's vital role in the Second World War is not forgotten.'

'… A Fighter Command Station at War not only brings to life those exciting but dangerous days, but helps to ensure that one airfield's role in the Second World War is not forgotten.'

I suspect that many might see the name of RAF Westhampnett and wonder where it is as it it not one of the most famous RAF stations of WW2. However, if I said Goodwood, I suspect many more would recognize that name from the annual Festival of Speed or perhaps the equally famous horse racing course. I found this to be a fascinating history of the airfield and extensively illustrated with period photos throughout, all with informative captions as well...

... This is a really interesting read and brought to life by the personal accounts of events from the period along with a collection of photographs which not only includes pictures of the men who worked there, both pilots and ground crew, along with many pictures of the aircraft and ground equipment in which modellers will find plenty of useful references and ideas. These days Goodwood is a popular destination for the Festival of Speed in particular but if you read this before your next visit, it may help give you an appreciation of the recent history of the land where this modern event takes place today.

As seen on Sky & Bullets.

A very good an informative written work and great photos.

This book tells the story of a fighter command base in Sussex initially known as RAF Woodcote by the ground crew but later RAF Westhampnett. The author details how it served the country - without fail - for such a long period of time. From the Battle of Britain through to Arnhem. It is a touching book that includes many first hand accounts by pilots and ground crew and a large number of black and white images of those squadrons and ground crew associated with the airfield. Well researched and well worth a read.