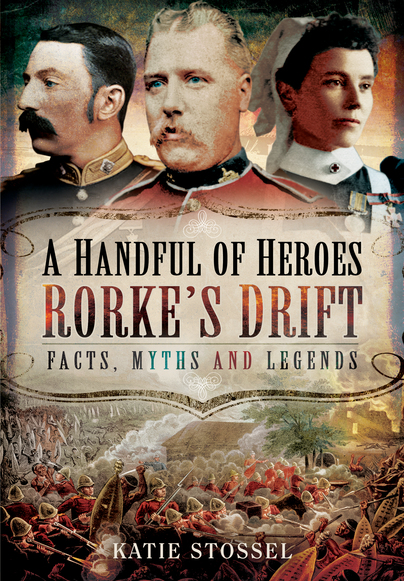 As seen in the Daily Mail: 'Why the top brass opposed VCs for the heroes of Rorke's Drift... because they were simply "doing their job" – but an admiring Queen Victoria thought differently.'

You'll be £4.99 closer to your next £10.00 credit when you purchase A Handful of Heroes, Rorke's Drift. What's this?
Need a currency converter? Check XE.com for live rates

This is a remarkable book as it takes an incisive look at a subject which has been ‘written to death’ since 1879. This new research rightly and carefully challenges many long-held views on what really happened at Rorke’s Drift. Most Zulu War authors have relied too heavily on set pieces of contemporary accounts of the battle but without challenging their authenticity. And one must remember that these accounts have been written by the victors with reputations to preserve or enhance. As the book reminds us, Rorke’s Drift was viewed by army officers present and part of the invasion force as a typical ‘skirmish’ and wondered at all the fuss being made of the event.

The ‘Chard Report’ has long been held to be an accurate account of what happened – but Katie Stossel has had the style scientifically analysed and this analysis has thrown open the question of its authenticity. Other important factors then come under the author’s magnifying glass. She looks at a number of desertions in the face of the Zulus and proves the mission station was prepared for a Zulu attack days in advance – and she has discovered fresh accounts of these preparations. Also reviewed are the letters from August Hammar, Otto Witt’s family friend, who was staying at the mission station when it came under attack – and who wrote letters home of his experience which disprove others’ accounts, including that of Otto Witt, the station missionary.

This is a well researched and interestingly presented account which answers many questions but which, in turn, poses others.

As featured in: 'The dreadful day at Rorke's Drift, when Zulu's were killed in their hundreds, left the soldiers that survived with a strange feeling that there's... Nothing So Sad as a Battle That's Been Won'.'

As featured in: 'Why the top brass opposed VC's for the heroes of Rorke's Drift'