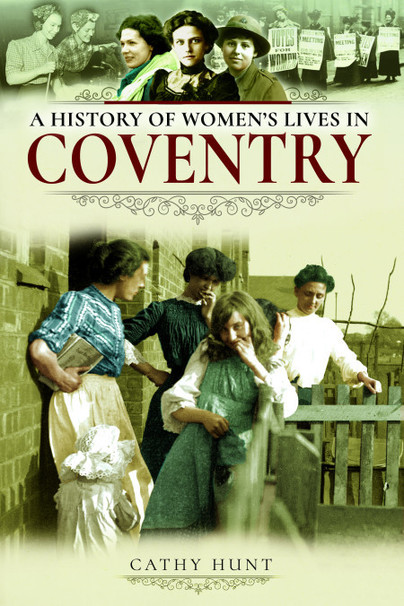 A History of Women's Lives in Coventry (Kindle)

Click here for help on how to download our eBooks
Add to Basket
Add to Wishlist
You'll be £4.99 closer to your next £10.00 credit when you purchase A History of Women's Lives in Coventry. What's this?
Need a currency converter? Check XE.com for live rates

Cathy Hunt examines the lives of Coventry women throughout one extraordinary century of change. The result of her detailed research is a book packed with stories of what it was like to be a woman between 1850 and 1950.

During these years, women broke through barriers so that future generations of women might experience greater freedoms than had ever been possible for their mothers. Others offered their time and exceptional talents for the good of the community.

The main focus of this engaging study is on the too often neglected details of women’s daily lives, of triumphs and tragedies, changes and continuities, loves and losses. What was it like to grow up in Coventry, to go to its schools, to work in its offices, shops and factories? What were women’s experiences of getting married, setting up home and raising children? How did women spend their scarce and precious leisure time?

In other words, this is a book about the business of being a woman in this distinctive English Midlands city.

Article: 'Look at history through female eyes' as featured by

Dr Cathy Hunt is a historian who has lived and worked in Coventry for many years, as a community worker, lecturer and writer. She has written women’s history from both national and local perspectives, with a keen interest in bringing to light the lives and work of ordinary people, particularly women, whose achievements have so often been ignored.