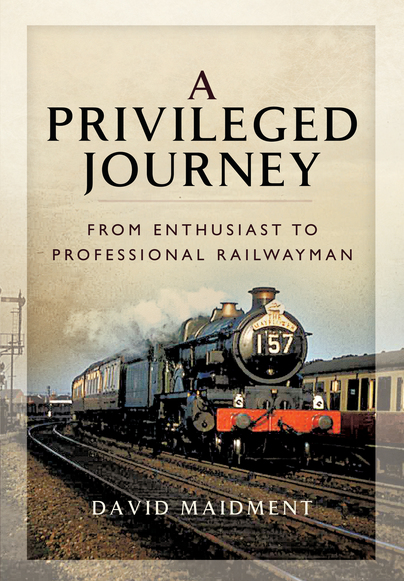 From Enthusiast to Professional Railwayman

Featured by Steam World magazine as the Review of the Month for December 2015.

You'll be £6.00 closer to your next £10.00 credit when you purchase A Privileged Journey. What's this?
Need a currency converter? Check XE.com for live rates

A Privileged Journey is a personal and individual account of the author's youthful enthusiasm for trains and the travels he undertook in Great Britain and on the European continent as a student and management trainee of British Railways. It is illustrated by over 140 black and white photos, mostly taken by the author himself as a boy and student. The chapters cover the emergence of the young boy's interest in steam locomotives in particular, through his 'trainspotting' days to his numerous journeys in the late 1950s and early 1960s, with many accounts of locomotive performance supported by an extensive appendix of train 'logs'. Some of the chapters are much extended narratives from articles serialised in the UK enthusiast magazine, 'Steam World' over the last decade and are also based on ten hours of verbal interviews recorded by the UK National Railway Museum at York as part of their 'Oral History' archives supported by a UK National Lottery Grant.

The second volume, to be published at a later date, covering the period from 1962 to the current time, will describe his continuing interest and records while pursuing his career as stationmaster, area manager, train planner, Regional operating manager and finally Head of Safety before his retirement in 1996 and subsequent career as an international railway safety consultant.

David Maidment has published a number of entertaining and insightful magazine articles over the years, and it is these that form the backbone of this publication, with all proceeds of this enjoyable read going to the Railway Children. What this book does, with new text, is cleverly tie his story together into a cohesive timeline.

As featured on Amazon Books and given a 5 Star rating!

The author has re-embarked on his privileged journey as a youthful enthusiast into a career in the railways. There is a second volume promised to take the story on from the 1960s to today. Together, the two volumes will make a unique account of railway life and technology. This first volume is a fascinating insight into what is now something of a lost world, but still a world of dreams and love of steam. Strongly recommended.

Not many people have the satisfaction of seeing their hobby become their life's work and whether you are a former trainspotter or not, many people will be grateful to David Maidment for sharing with us his rail journey so far.

David has had a privileged journey, and it's a privilege to read the first volume of his memoirs. We're looking forward to the next part.

As seen in Buses magazine, this book is a must read for all railway and transport enthusiasts alike.