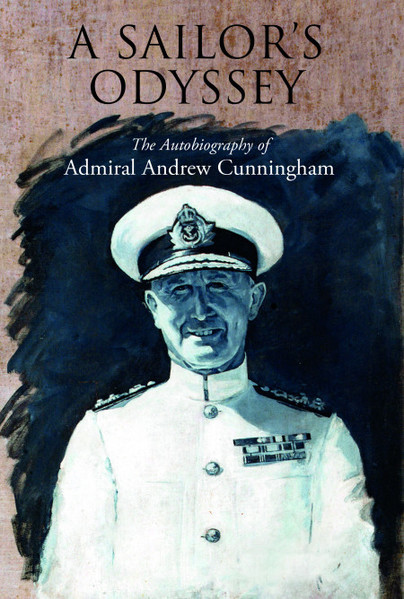 The Autobiography of Admiral Andrew Cunningham

Click here for help on how to download our eBooks
Add to Basket
Add to Wishlist
You'll be £9.98 closer to your next £10.00 credit when you purchase A Sailor's Odyssey. What's this?
Need a currency converter? Check XE.com for live rates

Admiral Andrew Cunningham, best remembered for his courageous leadership in the Mediterranean in the Second World War, is often rated as our finest naval commander after Nelson, and indeed a bust of the Admiral was unveiled in Trafalgar Square close by his predecessor in 1967 by the Duke of Edinburgh.

It was during the dark days of 1940–41, after the surrender of France and Italy’s entry into the War and when Britain was fighting single-handed, that Cunningham held the Eastern Mediterranean with a fleet greatly inferior to the Italian; his lack of ships and aircraft was more than made up for by his bold and vigorous command. Taranto, Matapan, Crete, North Africa – these are the critical battles and regions with which he is so closely associated.

A Sailor’s Odyssey is the stirring autobiography of this great fighting seaman from his boyhood in Dublin and his early career in the Navy and his service in the First World War, through his commands in the inter-war years, to the great sea battles in the Mediterranean, and then his elevation to First Sea Lord in 1943 and his subsequent responsibility for the operational policy of the Royal Navy during the later stages of the War. He attended the conferences at Casablanca, Teheran, Quebec and Yalta, and gives revealing glimpses of Churchill, Roosevelt and Stalin. His was, truly, a remarkable career.

This is a beautifully written and absorbing naval memoir, and it made a significant contribution to the history of the Royal Navy in the Second World War when it was first published in 1951; this new paperback edition, with an introduction by his great nephew Admiral Jock Slater, will fascinate and delight a new generation of readers and bring into focus again a great British fighting admiral.

"At over seven hundred pages, this lengthy autobiography is in fact two stories, the full story of one of our greatest fighting admirals, and secondly a detailed and fascinating 370 page account of the naval campaign in the Mediterranean, which is the core of the book. It provides a first hand, ‘centre stage’ insight into that desperate, heroic naval campaign, which played such a crucial role in finally turning the course of the war in the Allies favour...This important, and very full autobiography is most strongly recommended to historians, authors and researchers, as well as to students of naval history and the Second World War."

"This work, the recounting of a ‘Sailors Odyssey’ is a very finely written and absorbing account of the life and career of one of Britain’s finest sailors."

ADMIRAL ANDREW CUNNINGHAM was born in Dublin 1883 and lived to fight through two World Wars. He was awarded the Distinguished Service Order during the Great War for his actions in the Dardanelles and the Baltic. He was Commander-in-Chief, Mediterranean Fleet during the early years of the Second World War before being made First Sea Lord in 1943, a post he retained until 1946. He was ennobled as Baron Cunningham of Hyndhope in 1945 and made Viscount Cunningham of Hyndhope the following year. He died in 1963.