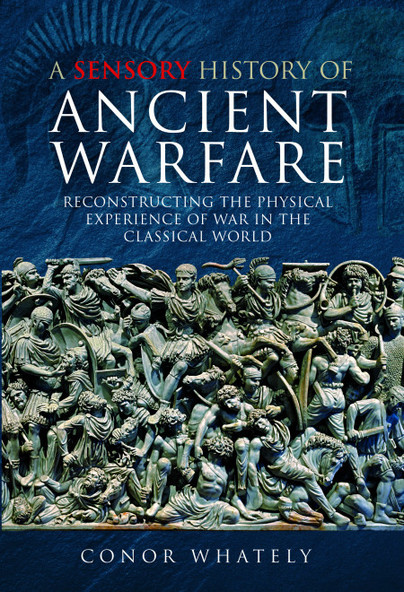 Reconstructing the Physical Experience of War in the Classical World

Click here for help on how to download our eBooks
Add to Basket
Add to Wishlist
You'll be £8.99 closer to your next £10.00 credit when you purchase A Sensory History of Ancient Warfare. What's this?
Need a currency converter? Check XE.com for live rates

How can we attempt to understand the experience of those involved in ancient battles, sieges and campaigns? What was the visual impact of seeing the massed ranks of the enemy approaching or the sky darkened with their arrows? How did it feel to be trapped in the press of bodies as phalanxes clashed shield to shield? What of the taste of dust on the march or the smell of split blood and entrails? What of the rumble of approaching cavalry, the clash of iron weapons and the screams of the dying? The assault on all five senses which must have occurred is the subject of this innovative book.

Sensory history is a new approach that attempts to understand the full spectrum of the experience of the participants in history. Conor Whately is the first to apply the discipline in a dedicated study of warfare in the classical world. He draws on literary, archaeological, reconstructive and comparative evidence to understand the human experience of the ancient battlefield in unprecedented depth.

I think it’s obvious what made me curious about A Sensory History of Ancient Warfare by Conor Whately* – Reconstructing the Physical Experience of War in the Classical World. This book offers a different view on military warfare, with a focus on what people and soldiers experienced in preparation for the fight, while in combat, and in the aftermath. He uses a lot of historical documents in his research and the book is fascinating. Usually military history has a narrow audience, but I think this book could be interesting for many more due to both its topic and how it is written. Unsurprisingly I gave the book a very well deserved 5 stars.

Whately uses both literary sources, but also archaeological to crate a broad view of what ancient people experienced. He looks at 6 battles in detail. Two battles are from ancient Greece, Cunaxa (401 BCE) and Issus (333 BCE), two Roman, Cannae (216 BCE) and the sieges of Jerusalem and Masada (70s CE), and the last two are from late antiquity, the battle of Strasbourg (357 CE) and the siege of Edessa (544 CE). He talks about the animals too and there is a funny story regarding an elephant.

I enjoyed the book and I would recommend it. It offers a new perspective on a subject so widely researched and analysed. There are only a few books on sensory history and I can only hope that more books will appear in the future.

The book explores its content through an introduction about the loss of Varus’ legions in the Teutoburg in 9AD before examining the Greek world through Cunaxa (401BC) and Issus (333BC); the Roman world through Cannae (216BC), Jerusalem (70AD) and Masada (72-74AD); and finally late antiquity through Strasbourg (357AD) and Edessa (544AD).
The stated aim is to assess the evidence for what the ancient battles and sieges would have looked, sounded, tasted, smelled and felt like to its participants. There is a lot of speculation as you’d expect, and some obvious inferences such as the smell of sweat or the foods consumed, but the book does offer some interesting insights.
The Battle of Cunaxa (401BC) talks about the feelings of reassurance the hoplite would have taken from the bumps from their colleague on the left as they advanced which re-enact its will of course recognise from their own advancing lines, but also the fear the right-hand members would feel seeing their vulnerable right flank exposed, hence the drift right and the corresponding feelings transmitted through the ranks. I think this adds more to the retelling than just stating that phalanxes drifted right.
Alexander’s choice of position for himself and his cavalry at the Battle of Issus (333BC) make a lot of sense with the aid of a side-scan radar of the battlefield (although it’s badly labelled and you have to work this out for yourself!) which makes evident just how much Alexander could and couldn’t see from horseback. His relatively advantageous position allowed him to view the whole Persian army and the position of Darius to time his charge to exploit the break in the enemy’s lines. The charge at the Persian Emperor, forcing him to retreat, was itself a very visual thing to inspire his men and intimidate the Persian troops. Simple things, but the focus on the physical experience certainly adds something to the retelling of familiar battles as the author searches for evidence of sensory input that will help explain the decisions and experiences of the commanders and their men.

This is a very interesting take on ancient warfare, the author attempts to take the reader back to the sites and smells of the battlefield.

The author did an excellent job of bringing the past to the present! He goes into great detail about some of the events and explains why we think events looked, smelled, sound, and felt like they did. There were times when it felt a little spotty in description, but I understand that some of these events happened thousands of years ago and records can be hit or miss, a problem which the author addresses. Overall a good read, not at all dry. I would definitely recommend this to anyone interested in learning more about warfare of the past.

Conor Whately gained his doctorate in Classics and Ancient History from the University of Warwick and is now an associate professor of Classics at the University of Winnipeg, Canada. He has published widely on ancient warfare, particularly in the Late Roman world, including four previous books: Battles and Generals (2016), Exercitus Moesiae (2016), An Introduction to the Roman Military from Marius to Theodosius II (2020), and Greek and Roman Military Manuals: Genre, Theory, Influence (2020, co-edited with James Chlup).