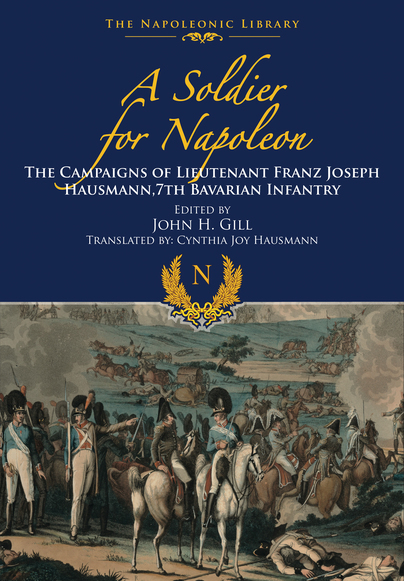 A Soldier for Napoleon (Kindle)

Click here for help on how to download our eBooks
Add to Basket
Add to Wishlist
You'll be £4.99 closer to your next £10.00 credit when you purchase A Soldier for Napoleon. What's this?
Need a currency converter? Check XE.com for live rates

‘Fills a very noticeable gap in the history of the Napoleonic Wars by providing a good description of what it was like to be a member of the Royal Bavarian Army.’
HistoryNet

The letters and diaries of Lieutenant Franz Joseph Hausmann are here placed in the context of the military events of the period by renowned historian John Gill. They stem from Hausmann’s first campaign in 1805 in the war against Austria, followed by the 1806 and 1807 campaigns in Prussia and Poland. In 1809 he was in action against the Tyrolean insurrection and he also fought at Abensberg and Zniam. He was only twenty-three when he embarked on the ill-fated 1812 invasion of Russia and served as part of the Bavarian corps that was shattered in this cataclysmic campaign. He survived to describe the 1813 campaign and the 1814 campaign in France when the Bavarians switched sides and fought against Napoleon.

With additional commentary by John Gill on the Bavarian Army and its campaigns and battles, this book is an important, authoritative addition to the works on the Napoleonic Wars.

The letters and diaries of Lieutenant Franz Joseph Hausmann are here placed in the context of the military events of the period by renowned historian John Gill. This book is an important, authoritative addition to the many new works on the Napoleonic Wars that modern scholarship is bringing to light.

Edited by historian John H. Gill, the text of this book - first published in 1998 and now in 2016 - is formed from the letters and diaries of Lieutenant Franz Joseph Hausmann, a junior staff officer from Bavaria. The account begins with his first campaign which was against Austria in 1805; this is followed by the 1806 campaign in Prussia, then that of 1807 in Poland. Next comes the
ill-fated 1812 invasion of Russia. The author was 23 at the time of the campaign, serving within Napoleon’s Grande Armee with the VI Bavarian Corps commanded by Marshal St. Cyr and which suffered heavy casualties. Hausmann survived however and went on to serve in the campaign of 1813 and then in 1814, when the Bavarians changed sides and fought against Napoleon. The writer’s letters describe the hardships and danger of the various campaigns, also shedding light on just what life was like for the ordinary serving soldier. The editor’s comments serve to place this first-hand account within the wider context of the time, making the book a valuable addition to the Napoleonic bookshelf. There are seven appendices, covering such topics as Battles and Engagements, The Bavarian Infantry Regiment and Bavarian Orders of Battle. Also included are 21 monochrome illustrations, seven maps, a bibliography and an index.

This is a detailed and very personal view of his life in the army during the Napoleonic wars and does makes for some fascinating reading for anyone interested in the Napoleonic period.

This book is a necessary read for anyone who wants to know what life was like for the common soldier of the period and what motivated them to do so much in the name of the Emperor.