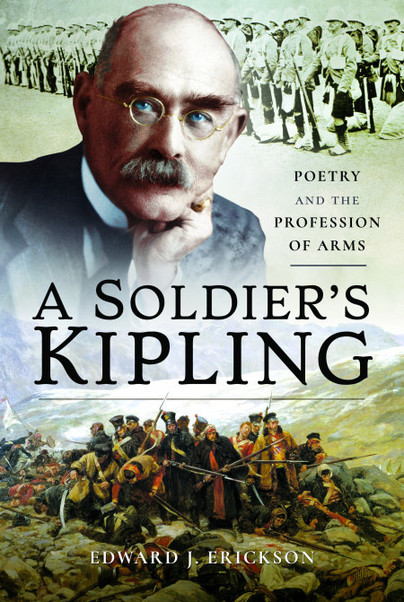 Poetry and the Profession of Arms

Click here for help on how to download our eBooks
Add to Basket
Add to Wishlist
You'll be £4.99 closer to your next £10.00 credit when you purchase A Soldier's Kipling. What's this?
Need a currency converter? Check XE.com for live rates

Rudyard Kipling was one of the most versatile writers of the Victorian age – a journalist, storyteller, historian and poet. One of the major subjects of his poetry was the British army and the way it waged its campaigns during Queen Victoria’s ‘little wars’, and it is this aspect of his writing that Edward Erickson explores in this absorbing and perceptive study.

Kipling’s military poems offer insights into the profession of arms and how soldiers were trained and fought in distant expeditionary campaigns – they bring to life the world of the Victorian soldier in the most evocative way. Although not a soldier himself, Kipling wrote about timeless themes of military and wartime service, the experience of combat, unit cohesion and individual courage.

A Soldier’s Kipling is an original contribution to the understanding of Kipling’s work and his times, and it should lead to a fresh appreciation of a facet of his writing that has not been focused on so closely before.

This is not a conventional analysis or run of the mill history of the work of the revered poet of the British Empire. The Author is a retired US Marine Corps officer and Academic well known for his authorative studies of the Ottoman Army and its campaigns in Gallipoli and Palestine. He takes the reader inside the poetry and looks outward. I thoroughly enjoyed reading what is a thought provoking study of Kipling’s works that sets out to link the poetry to the experiences of the modern soldier. The unintended benefit is that this perceptive narrative is a collection of ideal research material and background reading for the Battlefield Guide. The pick of the titles reviewed so far this year

This is a splendid book for a relaxing winter’s evening and highly recommended.

... this reviewer found this volume a delightful, well written, informative and (above all), memorable volume, to the extent that it bids fair to become a Standard Reference Work on its subject.