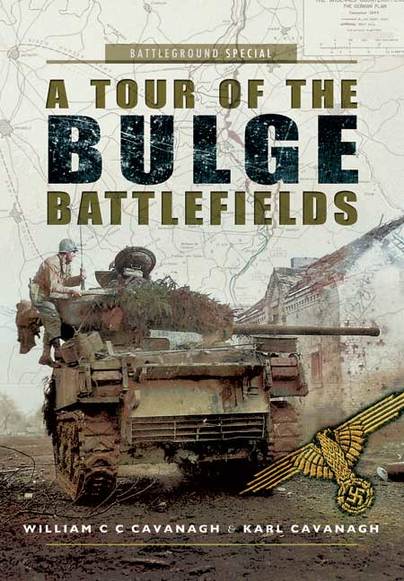 A Tour of the Bulge Battlefields (Kindle)

Click here for help on how to download our eBooks
Add to Basket
Add to Wishlist
Get A Tour of the Bulge Battlefields (Kindle) for FREE when you purchase 2 other eBooks.
Need a currency converter? Check XE.com for live rates

No other conflict has sparked the imagination or interest of so many people worldwide as World War Two.

Most Americans are patriotic, their interest in World War Two having been stimulated by such movies as ''Saving Private Ryan''. Hundreds of thousands are the descendants of men who saw service in the Battle of the Bulge. This battle still holds the record for the highest number of American troops engaged in any single pitched battle in the history of the United States Army. Americans of the post-war generations are taking an interest in what their fathers and grandfathers did during the War.

Those whose relatives served in the Ardennes often visit Belgium and Luxembourg in an attempt to learn more about those now legendary days of World War Two.
This guidebook serves as a memorial to those who served. It will enable those who didn't, to learn something about the hardship endured by a previous generation in the name of freedom.

The book A Tour of the Bulge battlefields covers a big deal of the Battle of the Bulge battlefields and it will take you along many different historical sites in Belgium and Luxembourg. It describes the effort of both U.S and German troops to fulfill their mission in high detail which will keep you jaw dropping from time to time. Every chapter focuses on a different spearhead by the German Army and will describe their activities until they were halted.

Most people have heard of the Battle of the Bulge that took place in the North Western European
theatre in World War 2. There are a few popular television feature films covering it and much literature is devoted to it. Although there is a significant amount of literature this book is different – it describes the key battlefields then and now.

Originally it was published in 2001 by William Cavanagh and it provided a detailed guide on the
features of the Battle of the Bulge. The battlefields were described with well researched background information on the events, details of cemeteries, lost graves and the exploits of Medal of Honor recipients. The Medal of Honor being the USA’s highest award for bravery rather like the UK’s Victoria Cross.

This new and revised version has been updated by the original author’s son, Karl. He has provided
updates on all key information and the sites that have changed in the intervening years. There are
maps of the battlefields, lots of illustrations and both period and modern photographs.

In my opinion there are two reasons why you must buy this book. Firstly, it is an essential guide to visitors to the battlefields of the Bulge. Perhaps you are a veteran wishing to re-visit scenes or wanting to know more about a relative’s exploits, or perhaps you could just have an interest in visiting the battlefields. The second reason is because you are an “arm chair” tourist and want to “visit” the battlefields and because of whatever reason you are unable to go there physically.

Regardless of your reasons for wanting to visit the Bulge physically or from your arm chair then this book is essential. I would not dare visit the scenes without it and neither should you!

A new and revised edition in Pen and Sword's Battleground Series, the authors have updated their guide to touring the battlefield known best as 'The Battle of the Bulge', covering the Ardennes region of Southern Belgium and the Luxembourg border where US troops were taken by surprise with the force of the German 'Wacht am Rhein' offensive in December 1944.

As with most battlefield guides it starts out with some background to the book itself, along with notes about travel and accommodation in the region, and some hints on useful maps to have with you, as well as background information on the attack itself. It then splits into 6 chapters, each one making an effective 'tour'. The first one covers Monschau-Hofen-Wahlerscheid-The North Shoulder-Elsenborn Ridge. Second is Kampfgruppe PeiperLosheim to La Gleize. Third is The Losheim Gap - Schnee Eifel - Schoenberg St Vith - Vielsalm. Fourth is Dasburg-Clervaux-Bastogne, fifth is 'Parkers Crossroads' to the Meuse River and finally six covers Wallendrf - Hoesdorf. This effectively takes you from the northern to southern areas where the battle took place. Useful appendices follow with details of Military Cemeteries, a Battle Chronology, a list of Medal of Honor winners and their citations, and finally a tale of search and discovery to track down some lost graves which were only found in 2001, enabling some missing US servicemen to be found and returned for a proper burial.

Each of the 6 tours gives a starting point and then describes the route to take and what to look out for. It is interspersed with the story of what happened at certain points and what you should look out for at each stopping point. Mixed among this are archive photos, appropriate maps as well as photos of what you will see today. It gives a detailed route for the tourer to take and helps you look out for things worth seeing on the way. In what is a peaceful and beautiful countryside today, it is well worth having the awareness of what took place here back in the winter of 1944. I have visited Bastogne while passing through the area a couple of times in recent years, prior to that it was on a cycle tour way back in the 1970's. I do intend to go back to the Ardennes and spend some time touring and this guide will definitely be in the car with me when we go.