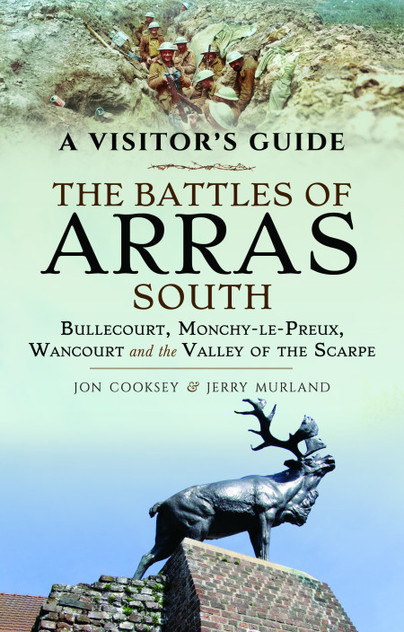 A Visitor's Guide: The Battles of Arras South (Kindle)

Bullecourt, Monchy-le-Preux, Wancourt and the Valley of the Scarpe

Click here for help on how to download our eBooks
Add to Basket
Add to Wishlist
You'll be £6.98 closer to your next £10.00 credit when you purchase A Visitor's Guide: The Battles of Arras South. What's this?
Need a currency converter? Check XE.com for live rates

The First World War battlefields to the south of Arras – including Battery Valley and Observation Ridge, Telegraph Hill, Monchy-le-Preux, Wancourt, and Bullecourt – are among the most famous and most visited sites on the Western Front, rivalled only by those around Ypres and the Somme, and this clearly written, highly illustrated guide is the ideal introduction to them.

Visitors can trace for themselves the course of each battle across the modern landscape and gain a fascinating insight into the nature of the fighting in the area – and the wider conflict across the Western Front – throughout the war. The book covers the key battles fought in the southern sector of the Arras front, including the 1917 battles fought at Battery Valley, Monchy-le-Preux, Wancourt and Bullecourt.

Expert guides Jon Cooksey and Jerry Murland have devised a series of routes that can be walked, biked or driven, explaining the fighting that occurred at each place in vivid detail. They record what happened, where it happened and why, and point out the sights that remain for the visitor to see. Their guidebook is essential reading for visitors who wish to enhance their understanding of the war on the Western Front.

Jon Cooksey and Jerry Murland have devised a series of routes that can be walked, biked or driven, explaining the fighting that occurred at each place in vivid detail. They record what happened, where it happened and why, and point out the sights that remain for the visitor to see. Their guidebook is essential reading for visitors who wish to enhance their understanding of the war on the Western Front.

This is a fantastic little book and I will say why, it includes the battles at Bullecourt, Monchy-le-Preux, Wancourt and the Valley of the Scarpe. Now this book seems to have everything from the history of the battles and area, local churches and cemetaries. It even has a acouple of tables at the back of the book about the VC winners and the notable people killed at the various sites. Inside the book not only is all the text clearly explained and laid out, but it’s easy to follow. Together, with this we have some fantastic photos, pictures and maps which help knit everything as one. An excellent little book and if you were going to visit the area, I just don’t see why you wouldn’t take along a copy. It’s a must.

A practical guide for visitors to the Battlefields of Arras South. Two experienced battlefield guides have combined their considerable experience to produce an informative and very helpful guide to maximise the experience. – Very Highly Recommended.

I’ve used many guides in the past and would count this one as being of the very highest order. The authors know their subject well and they have gone to quite extraordinary lengths to ensure that the superbly laid out information within the guide is supplemented by stories and observations which bring the text to life. The style of their presentation will do much to enhance the experience of those who
choose to use this guide to inform their visit to an often-overlooked part of the Western Front.

Arras has a lot of history from both World Wars and is well worth the trip. These days a lovely part of the world and plenty of good food available in the many restaurants as well. An excellent little guide from two experienced battlefield historians.

This is a slim volume, easily carried on the battlefields. It does what it says on the tin and will certainly be in my pocket when I venture to the Arras battlefields later this year.

Another excellent visitor’s guide from Cooksey & Murland that complements their guide to Arras North. This book focuses on Arras South and delivers a clear description of the ground, the actions that took place on it and the many vignettes of those who were there. As would be expected from these authors they add their own thoughts and insights on what you can see from each location because they are battlefield experts who know their stuff! The several suggested routes and walks are clear and will greatly assist anybody visiting the battlefield.