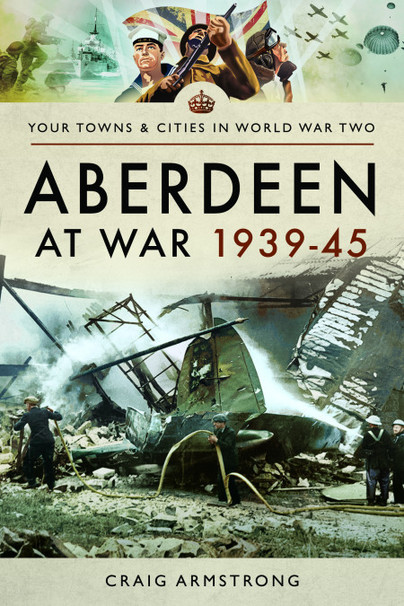 Click here for help on how to download our eBooks
Add to Basket
Add to Wishlist
You'll be £4.99 closer to your next £10.00 credit when you purchase Aberdeen at War 1939–45. What's this?
Need a currency converter? Check XE.com for live rates

Scotland was of grave strategic importance during the war due to its geographical position, while its capital was the location of a significant number of important military and civil organisations. Aberdeen possessed important shipbuilding facilities, including Hall, Russell & Co., which built a number of vessels during the war, such as corvettes and frigates, resulting in the yard being targeted by the Luftwaffe on a number of occasions.

The fishing fleet was also of prime importance in supplying food for a war-starved Britain and many Aberdeenshire men constantly risked their lives putting out to sea in order to land fish. Many were killed in attacks by enemy aircraft or mines.

No member of the population of Aberdeen escaped the war, whether it was the huge numbers of men and women from the area who came forward for service in the military or in roles such as the Home Guard, ARP services, nursing, working in vital war industries, or struggling to maintain a household under strict rationing and the stresses of wartime life. Evacuation proved a thorny issue as Aberdeen was originally classed as a ‘neutral area’ and no plans were made for evacuation. By 1940, however, there was anger and frustration as several groups petitioned for this classification to be changed.

These petitioners were probably proved correct as Aberdeen went on to become the most frequently raided city (after London) in Britain suffering 32 attacks and 364 air raid warnings earning the city the nickname the ‘Siren City’. Aberdeen also suffered the final Luftwaffe attack on Scottish soil when a concerted attack was made on 21 April 1943, resulting in 125 deaths and an estimated 12,000 houses being either destroyed or damaged.

Aberdeenshire also played a significant role in the war effort in the air. It was ideally placed to enable the RAF to patrol not only the north-east of Scotland, but also the North Sea and the vital approaches to the naval base at Orkney, while the RAF also launched raids on occupied Norway and enemy shipping.


A comprehensive historical treasure chest is what awaits in Armstrong’s recent book. Black and white photographs interspersed with detailed explanations of life in Aberdeen during World War Two. This is an interesting read for anyone from the northeast. Armstrong successfully transports readers back in time in this poignant ode to the people of the Granite City and their contribution to the war effort. A must-read for history buffs.