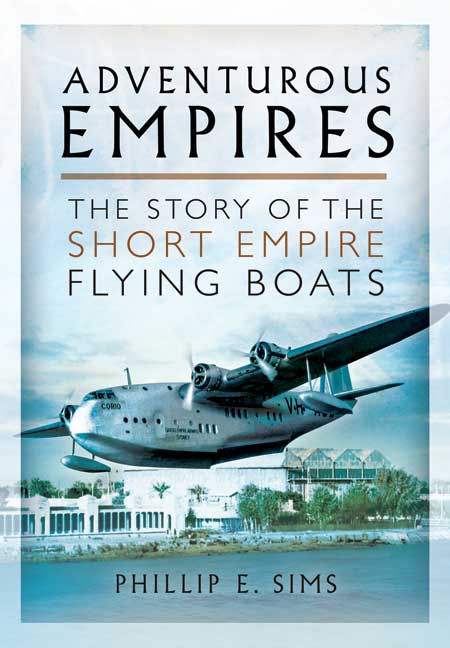 The Story of the Short Empire Flying-Boats

Click here for help on how to download our eBooks
Add to Basket
Add to Wishlist
You'll be £4.99 closer to your next £10.00 credit when you purchase Adventurous Empires. What's this?
Need a currency converter? Check XE.com for live rates

This is a story from a bygone era, recalling the most successful flying-boat airliner ever built. Designed to a specification for Imperial Airways, then Britain's national airline, it carried passengers and, more importantly, mail throughout the British Empire. The airliner offered luxurious travel for the privileged few, every journey being an adventure shared by passengers and crew.

The Short Brothers built 42 Empires at their factory in Rochester during the late 1930s. Imperial Airways were expanding their network to the furthermost outposts of the British Empire, whilst laying down the principles of scheduled airline operations. This is the tale of the realisation of a dream and the efforts of those who made it possible. During World War II, the military Sunderland version became an icon.

Present in Norwegian and Mediterranean theatres of war, it saw action during the German seizure of Crete as well as during the
famous Royal Navy Fleet Air Arm's torpedo attack at Taranto in late 1940. The history of the flying boat is one characterised by action and dynamism. During the perilous war years, it experienced a developmental surge in response to the various threats that were levelled at it and the men it conveyed.

This meticulously researched book relays the full history of the Short Empire flying boats, from both a civilian and a military perspective. First published in 2000 by Airlife, this Pen and Sword re-issue is set to bring the story to a new batch of enthusiasts, eager to expand their knowledge of this intriguing facet of developmental aviation history.

The “short” in the title refers to the airplane’s maker, Short Brothers, but short, too, was this plane’s—or rather boat’s—production run and airline service. “The truth that lies behind the romantic myths of the flying-boats is a wondrous tale of politics, dreams, engineering triumphs and the people who brought it all to life.” And that is exactly what this book tells. Sims paints a proper picture by explaining the need for long-distance transport to keep the far-flung British Empire together.

A point not often made in such books, and not often appreciated by people outside the seaplane community is that some of the very things that made flying boats feasible and attractive—water, water everywhere: you don’t need to build runways etc.—also caused some of the greatest problems. From corrosion to chop, nothing is simple in and on the water, not even at bases specifically created for flying boats.

A thorough book and, for the price, a lot of book!

“Remains the best overall book on the subject.”

It is a very comprehensive and readable account. quoting from contemporary sources to good effect, with a host of fascinating photographs from private collections. I would love to have flown in one of the C Class to Africa, India or Australia but as this pipedream is impossible to fulfil, this excellent book is a more than useful compensation.

This is a very detailed book, with a great deal of useful information on these impressive flying books, and takes the reader back into the early glamorous world of air travel, before that world was shattered by the outbreak of war.

There are many illustrations of the C-boats and this is a good history of the pioneering of the long routes to South Africa, Australia and New Zealand.

Must be considered the definitive work on the Short Empire flying boat. There have been a number of excellent works but none have provided the depth of detail that the late author achieved. The crisp text is ably supported by some excellent and rare photographs. For anyone wanting to learn more about the Short Empire, this is a very good place to start and to see how the Empire led to the wartime Sunderland that was to prove an immensely capable maritime patrol and anti-shipping aircraft that provided vital service to RAF Coastal Command in Norway, the Atlantic and the Mediterranean.

The late Phillip Sims joined the RAF in 1966 and always had a fascination with the history of aviation. This was his first book.