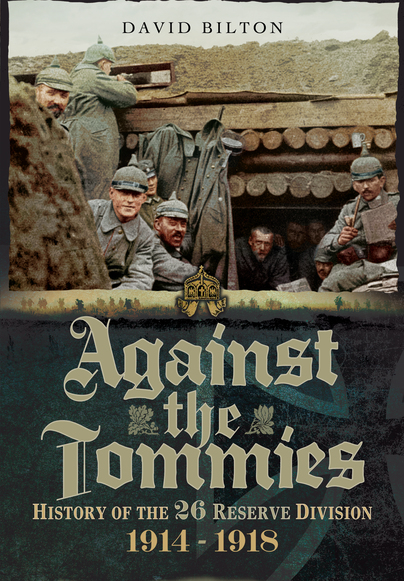 Against the Tommies (Hardback)

Add to Basket
Add to Wishlist
You'll be £19.99 closer to your next £10.00 credit when you purchase Against the Tommies. What's this?
+£4.50 UK Delivery or free UK delivery if order is over £35
(click here for international delivery rates)

This unique collection of images details the travels of a German infantry division along the entire Western Front, where it fought from the start until the end of the war. Interspersed with the captions and photographs are brief summaries of the actions the division fought in, first against the French and then the British. What makes this book particularly interesting to British readers is the unique focus provided on battles many are already familiar with, such as the Somme, Flanders and Arras. Also covered are the initial combats with the French in the Vosges, an area about which little has been written in English.

The photographs were chosen by the men of the division to form a commemorative book (a record of service), published in 1920, that detailed their experiences in the four years of war. None of the photographs have appeared in a British publication, so each will be fresh to the reader. Arranged chronologically, the illustrations show the changes behind the front as well as life on the line. The focus is largely on the photographs, taken by men of one the best divisions in the German Army, with a brief text that shows what they felt of their situation and where they went. The book provides a completely new look at life in the German Army during the war.

The photos will be of great fascination to all, not least a British readership given the concentration on key battles which the British army were in action at, including the Somme, Flanders and Arras. What is further remarkable is that the photographs were chosen by the men of the division to form a commemorative book and record of service.  As stated in the Preface, what makes the German wartime histories different from the many published by the Allied Forest is the large number of photographs included, all of them taken by soldiers in the field. Keeping diaries and taking photographs were forbidden by Allied troops. This Division spent much time fighting against Allied troops and to that end the book is of great interest to the British reader given the connection to the Somme and Third Ypres... At the back of the books are useful maps alongside a breakdown of the Wurttemberg Division. Overall, a very informative and useful visual aid to understand an Army at war.

Bilton has opened up the visual history of the 26th Reserve Division to an English-language audience with Against the Tommies.

This largely photographic work has an accompanying informative narrative as well as detailed captions for the many images used. The work follows, through the use of images, the travels of a German infantry division along the Western Front. The photos used were chosen by the men of division after the war for use in a commemorative book published in 1920. With photographs previously unpublished in Britain, this is a valuable pictorial record of the German army at war.

This spending book is dominated with the use of photographs that provide a unique insight depicting the travels of a German infantry division along the entire Western Front, where it fought from the start until the end of
World War I. The book includes brief summaries of the actions in which the division fought, and what I think will make it particular interesting to British readers is the different focus provided on battles with which many are already familiar such as the Somme. The photographs were chosen by the men of the division to form a commemorative book which was published in 1920, and it has pictures of everything from the beginnings of trench warfare to front line visits by the King of Württemberg, and even baking loaves of bread in improvised field ovens.

Arranged in chronological order, the illustrations offer the reader a very unusual and detailed look at life in the German Army during World War I than they may be used to seeing.

I recommend it if your looking for an interesting and extensive photograph collection following a particular unit.

What a fascinating book this is, for a couple of different reasons. Firstly because it is a large collection of photos from WW1, but this time covering a German division and showing life for the German soldier both in the front line, and in more peaceful surroundings behind them. What makes it even more interesting for me though is that this is actually based on a regimental history first published in Germany way back in 1920. In the British army during WW1 cameras were officially banned, even though some were still used by both officers and men, even knowing the risks of being caught with them. It seems that this was not the case for the German army, and the use of cameras was common. As a result, the original Regimental history was filled with a large number of photos taken by members of the division.​

The German 26th Reserve Division fought on the Western Front throughout the war, first against the French, but later against the British in place so well known to British WW1 histories. These include the Somme, Flanders, Arras, Ypres and Cambrai. There is an edited version of the original text to accompany the pictures, but they also have useful captions. There is so much to get your attention in the photos it is awkward to pick out things which might attract you. Among the early section there are some interesting images which include the Thiepval Chateau, which was intact when first seen, but then in stages to the autumn of 1915 when it is just the remaining ruins, which in turn then offered a different style of protection. Lots of good detail on uniforms and equipment that includes artillery, and after the eraly fighting against the French we see more of British battles, such as knocked out and captured tanks. One of the rarer pictures shows an Uberlandwagen, the unarmoured tracked load carrier that was based on the same chassis as the A7V.

The German trenches, concrete emplacements and the conditions that existed on the Western Front come 1917/18 are those of general devastation. Towns, villages and countryside was frequently obliterated while in rear areas you see the troops able to relax in some relative peace and quiet. These are photos largely unseen in any British publication before and the author has made a fine job of presenting it for us along with some good quality archive images, along with text to put each section in context from the start to the end of the war.