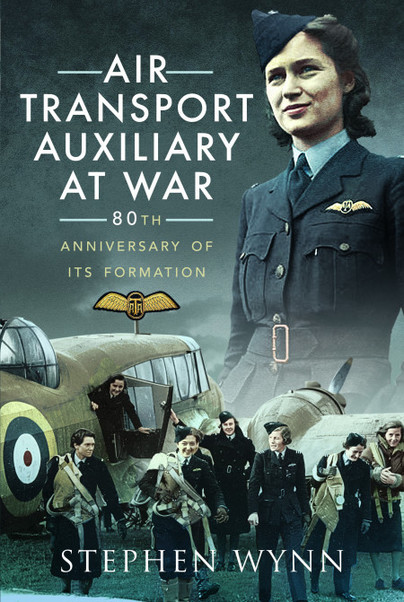 80th Anniversary of its Formation

Click here for help on how to download our eBooks
Add to Basket
Add to Wishlist
You'll be £4.99 closer to your next £10.00 credit when you purchase Air Transport Auxiliary at War. What's this?
Need a currency converter? Check XE.com for live rates

This book looks at the invaluable work carried out by members of the Air Transport Auxiliary during the course of the Second World War. Comprised of both men and women, it was a civilian organisation tasked with the collection and delivery of military aircraft from the factories to the RAF and Royal Navy stations. Men who undertook the role had to be exempt from having to undertake war time military service due to health or age, but other than that there were very few restrictions on who who could join, which accounted for one-legged, one-armed, one-eyed and short sighted pilots being accepted.

Initially it was only men who were allowed to carry out this service, but by December 1939, British authorities were persuaded by Pauline Gower (the daughter of Sir Robert Vaughan Gower, a wartime Conservative MP, and an accomplished pilot in her own right), to establish a women’s section of the Air Transport Auxiliary, of which she was put in charge. The first eight women were accepted in to the service, but it would not be until 1943 that its male and female members received the same pay.

By the end of the war 147 different types of aircraft had been flown by the men and women of the Air Transport Auxiliary, including Spitfire fighter aircraft and Lancaster bombers. These brave pilots were not just British, but came from 28 Commonwealth and neutral countries and their efforts sometimes came at a price: 174 Air Transport Auxiliary pilots, both men and women, died during the war whilst flying for the service.

"Mr Wynn clearly takes pleasure in exploring nooks and crannies. As a fellow enthusiast for the "not many people know that" school of writing history I enjoyed learning many things from this book."

This 132 page softback celebrates the 80th anniversary of this wartime civilian organisation which recruited men and women exempt from military service including the disabled, to collect and delivery military aircraft from the factories to the Royal Air Force and Royal Navy stations across the UK between 1939 and 1945. By the end of the conflict 147 different types of aircraft had been delivered in this way by pilots from 28 Commonwealth and neutral countries, often flying with no more knowledge than a set of Ferry Notes but including performance aircraft like the Spitfire and multi-engined like the Lancaster. 174 Air Transport Auxiliary pilots died during the war while flying for the service and this book attempts to cover them all, together with the stories of those surviving today.

This is a book that is difficult to put down. It is filled with incredible stories of ferrying aircraft through horrendous weather, inhospitable terrain, occasional attacks by the Luftwaffe, and the team effort needed to achieve the high success rate as a result of their efforts. There is a photo section with over 30 photos in the middle of the book and it really brings the names to life of both men and women who served in the ATA. Stephen’s passion for the subject comes through on every page and you will be hard pressed to find a more concise and yet comprehensive read on the ATA. It is a worthy tribute to the men and women of the Air Transport Auxiliary. I highly recommend this book for anyone with an interest in aviation, the ATA, women in aviation, and Second World War history.

This is a really good book packed with lots of detail and information about an organisation I knew little about. I would heartily recommend this book, it was nice to read a book on a subject that isn’t often covered.

Article: The Heroes of WWII ATA

A fascinating book, well worth reading.

I have recently become a WWII history scholar. After reading my first historical fiction novel last spring I have been hooked on reading and learning all I can about WWII. I have devoured both fiction and non-fiction books on the subject so when I saw this one available for review I jumped at it. There is so much more to learn about this war than what we were taught from our text books in school. I have been especially interested in all the varying roles women played in the war. The Air Transport Auxiliary or ATA as it was known is one of many subjects I had never heard of.
It was fascinating reading about the heroic women who flew countless missions during the war ferrying planes back and forth, some for repairs or to be exchanged. And some of the women lost their lives in this service as well as some of the men, regardless of it being a non-combat position. Enemy fire, mechanical failure, bad weather conditions all made for threatening situations for these brave men and women.
This is a wonderful book that goes into great detail outlining the history of the ATA for us. It is filled with facts about the pilots and their backgrounds along with facts about the planes that were flown and the missions carried out. It tells of the different ferry pools that were situated around the country that helped ATA cover the whole country while cutting down on time taken to deliver aircraft.
I also liked reading the newspaper articles that were included in the book. These gave an interesting insight into how the events of the war were portrayed by the press at that time.
I would recommend this book to those who appreciate facts without a whole lot of fluff. To me this book is written in such a manner as to list the bare facts of the ATA and their purpose during WWII with out any colorful descriptive fluff or stories.
I give it a 4 out of 5 because although I learned a tremendous amount of facts about the ATA.