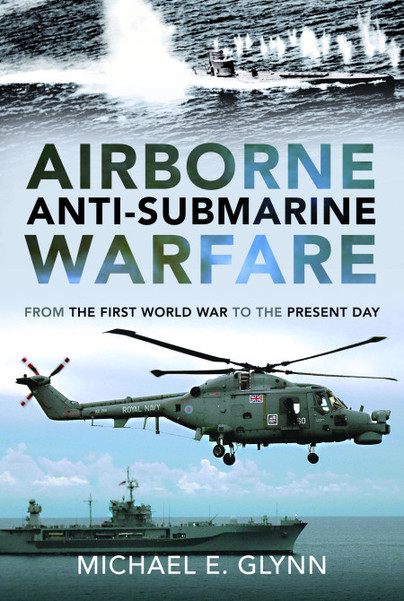 From the First World War to the Present Day

Click here for help on how to download our eBooks
Add to Basket
Add to Wishlist
You'll be £9.98 closer to your next £10.00 credit when you purchase Airborne Anti-Submarine Warfare. What's this?
Need a currency converter? Check XE.com for live rates

Airborne Anti-Submarine Warfare unlocks the history and theory behind the shadowy art of how aircraft hunt for submarines. Written by a veteran US Navy submarine hunting pilot, this book will take aviators, naval enthusiasts, and military scholars behind the scenes to understand how technical breakthroughs, the evolution of weapons, and advances in sensors have shaped this high-risk game of cat and mouse.

On 15 September 1916, the French submarine Foucault was spotted and attacked by a pair of Austro-Hungarian flying boats in the Adriatic. During the bombing that followed, Foucault was so badly damaged that she was eventually abandoned by her crew – all of whom survived. This was the first time in history that a submarine had been sunk by an aircraft. It was an engagement which set in motion a constantly evolving aspect of underwater warfare.

In this book, Michael Glynn explores a journey through the history of more than 100 years of aerial sub hunting. From the Great War, through the Battle of the Atlantic in the Second World War and on to the secret confrontations of the Cold War, the reader will witness the parallel evolution of both aircraft and submarine as each side tries to gain supremacy over the other. In so doing, he distils complicated oceanography, operations analysis, and technical theory into easily digested concepts, helping the reader understand how complex weapons and sensors function. By reviewing the steps of a submarine hunting flight, the reader can quickly understand how theory and practice fit together and how aviators set out to achieve their goal of detecting their submarine targets.

Airborne Anti-Submarine Warfare is a thrilling read for those seeking a glimpse into an arcane and high-stakes world.

It is clear from the start of this work that Michael Glynn a veteran U.S. Navy submarine hunting pilot, is expert at his former trade! He has amassed 2500 flight hours during many global deployments on three principal aircraft types e.g. T45c US Navy/Marine Corps version of the Hawk Trainer, P3c Orion ASW Patrol aircraft and the P8A Poseidon Maritime Patrol and Surveillance aircraft. That the latter two of these types have formidable sensor arrays reflects the level of technical competence required by pilots and crew in order for these systems to be operated effectively. In my past having worked with a former submarine principal weapons officer I was very interested to gain some idea of what it was like on the other side of the fence, so to speak! The book is very well structured and takes the reader through the characteristics of ASW aircraft and those of the submarine leading the reader through a brief history of ASW from the first sinking of a submarine (the French Foucault) on 15th September 1915 by a pair of Austro-Hungarian flying boats though to the present day. We are then taken into the detail on ASW weapons and sensors, a narrative very effectively supported by chapters on the science that forms the basis of weapon and sensor operations, for example sound propagation, oceanography, intelligence gathering techniques and how to use all that data to successfully conclude search and attack (or defence) operations and the management of crew resources in what is a shadowy game of cat and mouse. This is a highly readable work that will be of interest not only to the general reader but also those with a particular interest in naval history and Anti-Submarine Warfare in particular. The reader will gain a good understanding of how submarine targets are detected through this excellent narrative describing the the theory and practice of ASW!

This book takes the reader from World War One through to the present day looking at airborne anti submarine warfare, technology, tactics, sound and oceanology to name but a few. It's all very much a race between the two competitors countering submarines and intercepting and stopping submarines. The book takes us through fixed wing and rotary aircraft and looks at how radar hunting and technology have advanced for both sides.

What was good about this book is that it was written by a former pilot who has obviously experienced this type of warfare or fighting. It adds to the authenticity and expertise of the writing and very well done it is too.

This is an excellent introduction for the general reader. The author covers many technological aspects including electronic sensors, oceanography and ‘sound propagation analysis’ but with a highly readable approach. The seeds of many of todays ASW techniques were sown during World War II - for the full context of how these developed into a specialised branch of modern warfare there can be no better guide.

"A quite magnificent academic work which provides a truly up-to-date understanding of what is tomorrow’s battle-ground."

MICHAEL GLYNN is a veteran U.S. Navy submarine hunting pilot. He has logged 2,500 flight hours during multiple deployments worldwide and holds qualifications in the P-8A, P-3C, and T-45C aircraft. He has served as an anti-submarine warfare mission commander, instructor pilot, submarine operations planner, and anti-submarine warfare watch officer. A native of Philadelphia, PA, he holds a B.S. in Mechanical Engineering from the University of Pennsylvania and an MBA from Harvard Business School.