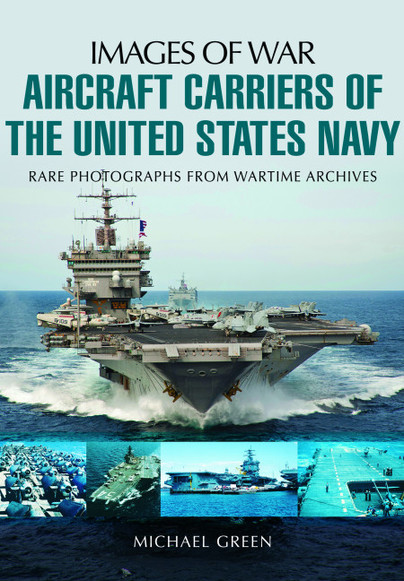 Click here for help on how to download our eBooks
Add to Basket
Add to Wishlist
You'll be £4.99 closer to your next £10.00 credit when you purchase Aircraft Carriers of the United States Navy. What's this?
Need a currency converter? Check XE.com for live rates

In 1922 the US Navy commissioned its first small experimental aircraft carrier. This was followed into service by two much larger and capable carriers in 1927 with five more being built prior to the Japanese attack on Pearl Harbor including three large Yorktown class.

To take the offensive against the Japanese Navy, the American Congress funded by far the largest carrier building programme in history based on the Essex class, a larger version of the pre-war Yorktown vessels. Of the twenty-six ordered, fourteen were commissioned in time to see Second World War service. These were joined by many smaller classes of carriers, including light carriers and escort carriers.
Post-war ever larger and more capable carriers were commissioned. Since 1975, when the first of a fleet of ten nuclear-powered Nimitz class carriers was commissioned, they have epitomized United States superpower status and worldwide power projection. These are due to be replaced in the decades to come with the even more sophisticated nuclear-powered Gerald R. Ford class.

Compiled and written by Michael Green, Aircraft Carriers of the United States Navy contains superb images of all the different types of classes of carriers employed by the US Navy since 1922. These and its highly informative text and captions give the reader a broad overview of this fascinating subject.

This is a pictorial history of the development of the US Navy's aircraft carriers - from a converted collier in 1922 to the nuclear powered 'Super-Carriers' of today - from carrying bi-planes to unmanned stealth jets. It focuses on the deployment of carriers during the Second World War and cover their development before and since...

... It is a comprehensive and concise illustrated history, supported by straightforward text and detailed photograph captions. It is more an appetizer than the main course. Yet this is a competent little book, and if one had to choose but a single volume on the topic of US carriers then this would have a strong claim.

This is a well captioned book, providing some fascinating visual insights into the evolution of the world's most powerful navy.

I already own several of these “Images of War” books and what is nice about the series as a whole is the format; slightly smaller than A4, aromatic paper, and easily digestible information in bite-sized chunks.

This book – as the name implies – concerns aircraft carriers. It details in four chapters the development of these ships throughout the previous and current centuries; pre-WW II, during, post-WW II, and into the age of the nuclear powered aircraft carrier. Each chapter begins with a short explanation of the developments of that era followed by annotated photographs...

... Throughout his book, Michael Green explains how these vessels were built and developed, and provides technical specifications where necessary. The amount of detail is spot on – not too little, not too much. The book contains several hundred photographs – most black and white. This seems only natural as much of the history of the carrier dates back to the time of black and white photograph. Personally, I find the most striking pictures those of the Japanese kamikaze attacks during WW II. The development of these ships into the modern era and the crucial role they play in the political relations is impressive.

This book contains superb images of all the different types of classes of carriers employed by the US Navy since 1922. These and its highly informative text and captions give the reader a broad overview of this fascinating subject.