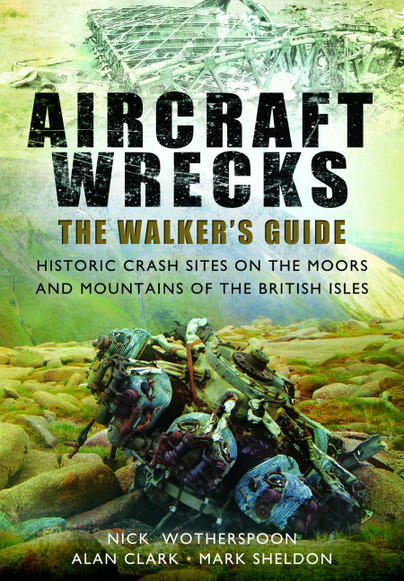 Click here for help on how to download our eBooks
Add to Basket
Add to Wishlist
You'll be £4.99 closer to your next £10.00 credit when you purchase Aircraft Wrecks: A Walker's Guide. What's this?
Need a currency converter? Check XE.com for live rates

Originally published to acclaim in 2009, this paperback re-issue aims to give readers access to the tangible remains of hundreds of historic aircraft that still lie at crash sites on the moors and mountains of the British Isles, all of which can be visited. It covers almost 500 selected sites, with emphasis placed on those located within open access land. The book includes accurate verified grid references, up-to-date site descriptions and recent photographs. Arranged geographically, each chapter features details of all major recorded air crashes to have occurred in that particular region. Areas covered include:

Representing the main upland areas of the British Isles, each of these sections is introduced with a brief narrative describing its geographical characteristics and aviation background, discussing the factors and trends lying behind the concentration of losses within each area and noting any especially significant incidents. Individual site entries include precise location details including, where required, additional references for scattered major items of wreckage and any relevant notes to aid finding or interpreting the crash site, together with details of the aircraft, names and fates of those onboard and the circumstances of the loss.

This is a useful guide to this subject, and has helped me answer a number of queries about the fate of aircraft as well as providing interesting targets for days out on the hills.

Ever since aircraft were invented aircraft wreck sites have had a magnetic appeal to the general population. Often the public have sought some kind of relic or memento from the site. The sites mentioned in the book are the tangible remains of historic aircraft that lie on moors and mountains of the British Isles. This volume concentrates on those wrecks on high ground and those which it does cover are the unofficial memorials to the fate of their crews.

The guide covers about 500 sites with emphasis on those on “open access land”. It provides the careful planning and location data needed to undertake a trip to a specific site. Also included are a narrative on the circumstance behind the loss, details, names and fate of the crew members. There are recent photographs of the crash site and information as to what is currently there. Important location co-ordinates are given in the form of accurate and verified Ordnance Survey (OS) map grid references and where appropriate references to those “scattered” major items of wreckage. There are also notes on how to find the site and how to understand it.

If visiting aircraft wreck sites appeals to you as perhaps a rambler, aviation historian or enthusiast, then this guide book is an essential part of your equipment. After reading the excellent coverage of sites in my local area it has inspired me to visit those local sites.

Fascinating historical background info is provided with coordinates for almost 500 aircraft crash sites across some of Britain’s wildest places…of interest to the hillwalking history buff.

This fascinating guide to nearly 500 crash locations throughout Britain will inspire you to head for the hills.

Whether you're a rambler or a fan of aviation, or both, this book certainly has a lot to offer.