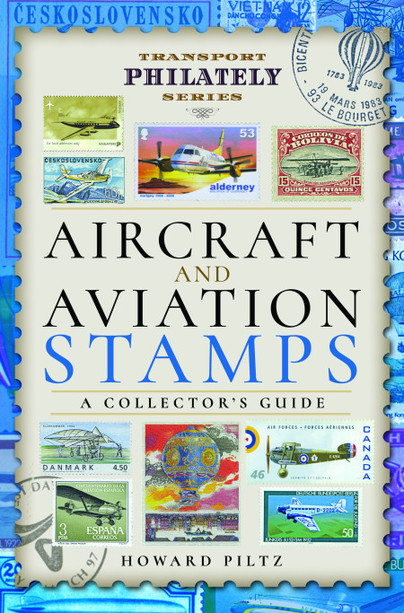 Add to Basket
You'll be £7.98 closer to your next £10.00 credit when you purchase Aircraft and Aviation Stamps. What's this?
Need a currency converter? Check XE.com for live rates

The author has combined his two greatest interests: Transport and Stamp Collecting and brought them together in this series of books looking at the way postage stamps have led him to increase his knowledge of our world via his interest in all forms of transport world-wide. Philately (the collecting of stamps) itself is a fascinating hobby looking at the development of postal services in all its forms, designs of stamps that have evolved the Victorian Penny-Black to today’s creations, often artistic but dependant more and more on photography with greater or lesser degrees of digital manipulation.

In his quest he has covered many unusual places that have only become more accessible with the advent of cheap air travel but has still found it necessary to use his own contacts, library of related books and more recently the internet to research his subject. Like all books in this series, they been laid out as global tour starting naturally in the UK and then travelling in an easterly direction through every continent – without, it should be added, crossing the International Date Line! Readers will not find every country included but a differing selection in each volume.

Many of us have an interest in philately and especially aviation philately and this books is just excellent. It’s well written, authoritative and has wide coverage with beautiful plates showing stamps with an aviation theme from across the globe.

Howard Piltz was born in 1945 and has lived all his life in the south Manchester area. Since being taken by his mother shopping by tramcar from Hazel Grove to Stockport or Manchester he has been increasingly fascinated by all forms of public transport leading to a career as a bus and coach driver. He has had several books published as well as articles on the subject in various journals, and has been a Chartered Member of the Chartered Institute of Logistics and Transport for over 20 years.