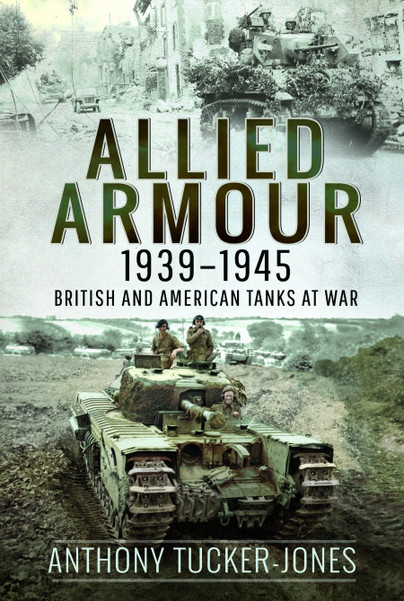 British and American Tanks at War

Click here for help on how to download our eBooks
Add to Basket
Add to Wishlist
You'll be £4.99 closer to your next £10.00 credit when you purchase Allied Armour, 1939–1945. What's this?
Need a currency converter? Check XE.com for live rates

During the first years of the Second World War, Allied forces endured a series of terrible defeats at the hands of the Germans, Italians and Japanese. Their tanks were outclassed, their armoured tactics were flawed. But the advent of new tank designs and variants, especially those from the United States, turned the tables. Although German armour was arguably still superior at the end of the war, the competence of Allied designs and the sheer scale of their production gave them a decisive advantage on the armoured battlefield. This is the fascinating story that Anthony Tucker-Jones tells in this book which is part of a three-volume history of armoured warfare during the Second World War.

Chapters cover each major phase of the conflict, from the early blitzkrieg years when Hitler’s panzers overran Poland, France and great swathes of the Soviet Union to the Allied fight back in tank battles in North Africa, Italy and northern Europe. He also covers less-well-known aspects of the armoured struggle in sections on Allied tanks in Burma, India and during the Pacific campaign. Technical and design developments are a key element in the story, but so are changes in tactics and the role of the tanks in the integrated all-arms forces that overwhelmed the Axis.

"Readers searching for an exhaustive study of American and British tanks in World War II need look no further..."

Anthony Tucker-Jones brings us the first book of his new trilogy on armored warfare during World War II,covering the most important phases of the conflict in Poland, France, the Soviet Union, Africa, Italy, Northern Europe and even Burma and India during the Pacific campaign. Anthony Tucker-Jones' books never cease to amaze us.

The author has demonstrated a sound knowledge of armoured vehicles in his previous books and this new book provides that knowledge in comparing British and American armoured vehicles at war. The Allied armour was much more capable than many historians have acknowledged and this book dispels some of the past errors and misconceptions of other military historians. – Very Highly Recommended

Divided in to 18 chapters, the book covers in detail the changing nature of armoured warfare throughout the conflict and looks at some of the major theatres of battle, tank design and tactics and the importance of the West's 'industrial muscle'.

Altogether an interesting look at Allied Tanks during WW2, and taking into account the good and bad aspects of them all.

I thoroughly enjoyed this book. Enough to read it all the way through, with enthusiasm, and still look forward to following it up with the Russian companion.

Overall, this is a really good book for anyone interested in WW2 and tank warfare. I can envision this being a popular read for those wargamers who enjoy the Second World War, as well as military historians. I found the book quite easy going and I didn’t feel it was a chore to read. I can highly recommend this book, and it would be well placed on anyone’s bookshelf.

...[a] broad overview that may serve as a springboard to further study.

Overall, this book can be described as an important review of armoured warfare, armoured vehicle design, tactics, and operational issues during World War 2. Anyone seriously concerned with armoured warfare should read this book as it has numerous lessons – many of which are as appropriate to the twenty first century as to the period covered. There are many exceptional facets to this book, and it comes highly commended.

The matter of armoured vehicles and their role in the turning of the tide against Germany is covered brilliantly in Anthony Tucker-Jones's excellent gtreatise.

A fascinating book about allied tank design, production and advancement from the allied side of the war. This seems to be maybe the third book from a series as the book has a very similar design to the recently released books Tank Warfare and Artillery Warfare. They are all impressive books indeed with the knowledge and knowhow standing out from the book. The chapters in the book cover various British and American tanks, but it also covers tank heavy manoeuvres and operations such as the attack on Italy, Northern African front and the western front in Europe too. Also included in the book is the leadership abilities and tactics of the tanks taken by various commanders such as Rommel and Montgomery. I personally think there is wider scope for a bigger book, but this is a great book written by a really good author who I know is at the top of his game. A thoroughly good book, well construction and I would happily recommend this book.