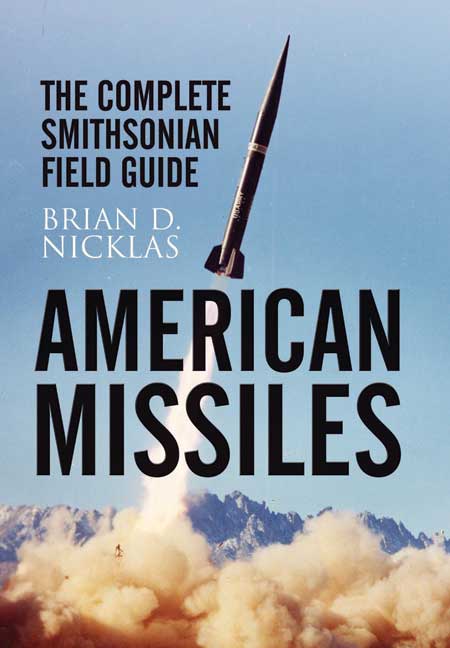 Add to Basket
Add to Wishlist
You'll be £30.00 closer to your next £10.00 credit when you purchase American Missiles. What's this?
+£4.50 UK Delivery or free UK delivery if order is over £35
(click here for international delivery rates)

This remarkable guide provides for the first time an illustrated listing of almost 200 of America’s most powerful missiles. With information on all aspects of the missile’s specifications, including the speed and capacity of the explosives used in its warhead, this book provides a comprehensive guide to the US Military’s projectile hardware.

American Missiles: The Complete Smithsonian Field Guide draws heavily on the Herbert S. Desind Photo Collection, a resource of more than 110,000 images recently catalogued at the National Air and Space Museum. Of interest to both the specialist and the aviation enthusiasts, this book demonstrates the evolution of American missile design over the last forty years in an accessible and entertaining format.

American Missiles is a all-in-one guide to an important subject and is presented in a logical manner.

This book serves two functions. It will, as intended, be very useful for anyone attempting to identify American missiles. It also provides an interesting overview of the development of American missiles over the last half-century and the numerous dead-ends and failed projects that fell along the way.

A sound source of factual information.

This book will probably become the definitive work on the subject for the period covered and provides fast access to facts on the range of US missiles produced since 1962.

I found the title to be very informative. The book is a great primer on US Missiles and well worth it just for the detailed introduction and the information on naming and designations. I have enjoyed reading this title and recommend it as a general reference on US Missiles.

The Complete Smithsonian Field Guide American Missiles by Brian D. Nicklas is the first book that covers all American missiles in the modern U.S. military designation system from the MGM-1 (Matador) to the present RIM-174 ERAM. All previous U.S. missile directories have only been snapshots of what missiles were active at the time. This meticulously-written, beautifully illustrated and invaluable work has been a labor of love for Nicklas, a Museum Specialist with the National Air and Space Museum of the Smithsonian Institution for 22 years with the Archives Division. In addition, the book contains a very useful Bibliography, including historical works, including several that cover the historical foundations of missiles, plus a list of missiles with modern designations within the Museum’s collections.

Brian Nicklas is a life-long enthusiast of aviation and studied Aeronautical Studies at Embry-Riddle Aeronautical University, Daytona Beach, Florida. As a writer and photographer, he has been published in several newspapers, magazines and calendars, and has written for aviation websites. Since 1987, he has been a member of the Archives Division of the Smithsonian Institution's National Air and Space Museum. He lives near Washington DC.