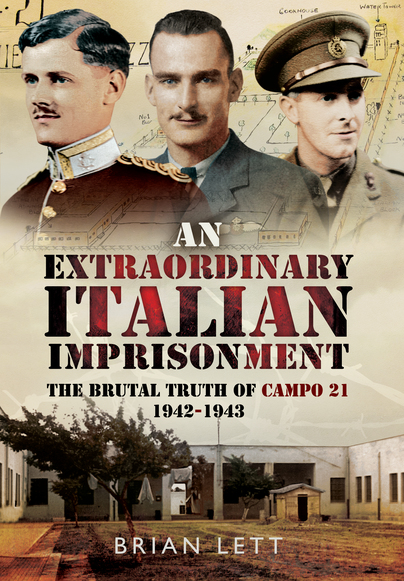 As featured on the Howard Leader Show

Listen to an interview with the author on the BBC iplayer http://www.bbc.co.uk/programmes/p02rwrv2 The interview can be found 01:07:04 in.

You'll be £4.99 closer to your next £10.00 credit when you purchase An Extraordinary Italian Imprisonment. What's this?
Need a currency converter? Check XE.com for live rates

This book tells the story of prisoner of war camp PG 21, at Chieti, Italy, between August 1942 and September 1943. It was grossly overcrowded, with little running water, no proper sanitation, and in winter no heating.

Conditions (food/clothing) for POWs were so bad that they were debated in the House of Commons.

The prisoners suffered under a violently pro-Fascist regime. The first Commandant personally beat up one recaptured escaper. A pilot was murdered by an Italian guard following his escape attempt. Tunnels were dug, and the prisoners were even prepared to swim through human sewage to try and get out. Morale in the camp remained remarkably high. Two England cricket internationals staged a full scale cricket match. Theatre and music also thrived.

After the Italian Armistice, in September 1943, the British Commander refused to allow the ex-prisoners to leave camp. Germans took over the camp, and most prisoners were transported to Germany. Some managed to hide, and more than half of these subsequently escaped. After the war, a number of the Camp staff were arrested for war crimes.

Brian Lett's book pays tribute to the many thousands of men who were captured by the enemy during World War Two. It tells the shocking story of the notorious Italian Campo 21 where his father, Major Gordon Lett DSO, was imprisoned.

Brian Lett provides us with a book that tells the little-known story of the prisoner of war camp PG 21, at Chieti Italy.

This book provides a unique insight into the Allied POWs held in Italian camps and specifically in Campo 21.