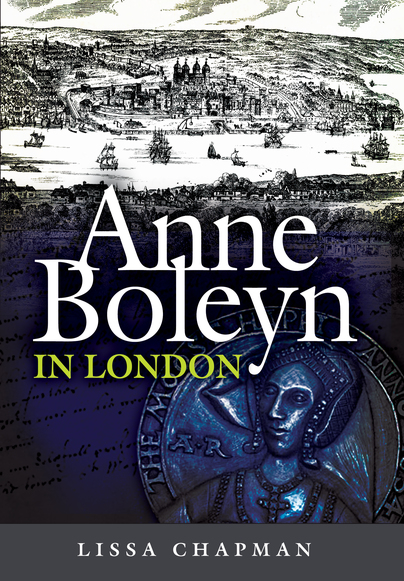 Click here for help on how to download our eBooks
Add to Basket
Add to Wishlist
You'll be £4.99 closer to your next £10.00 credit when you purchase Anne Boleyn in London. What's this?
Need a currency converter? Check XE.com for live rates

It was in London that most of the drama of Anne Boleyn’s life and death was played out – most famously, in the Tower of London, the scene of her coronation celebrations, of her trial and execution, and where her body lies buried.

Londoners, like everyone else, clearly had strong feelings about her, and in her few years as a public figure Anne Boleyn was influential as a patron of the arts and of French taste, as the centre of a religious and intellectual circle, and for her purchasing power, both directly and as a leader of fashion. It was primarily to London, beyond the immediate circle of the court, that her carefully 'spun' image as queen was directed during the public celebrations surrounding her coronation.

In the centuries since Anne Boleyn’s death, her reputation has expanded to give her an almost mythical status in London, inspiring everything from pub names to music hall songs, and novels to merchandise including pin cushions with removable heads. And now there is a thriving online community surrounding her – there are over fifty Twitter accounts using some version of her name.

This book looks at the evidence both for the effect London and its people had on the course of Anne Boleyn’s life and death, and the effects she had, and continues to have, on them.


Chapman has a clear and concise tone and way of writing, which makes it easy to read and understand. Anne Boleyn was a divisive figure and this book looks at the positive and negative sides of her, without really choosing a side to fall on. It purports to examine Anne’s rise, queenship and fall through the eyes of the places she stayed in London. There are also sections on Anne’s coronation in 1533, London in general, and court in London... an interesting and well-written biography of Anne Boleyn.

This book provides a detailed look into life in the 16th Century, not only of those within court but also a slight insight into the lives of the general public. You can definitely tell that this book was incredibly well researched. Anne Boleyn is probably the most famous wife of Henry VIII and there is so much to learn about her and a lot of this information can be provided by this book. If you’re interested in Tudor history or are a fan of Anne Boleyn, this is a must read.

This novel is effective in giving the reader a detailed look at real life in Tudor England with respect to actual day-to-day activities such as hygiene and the difficulty of moving Henry’s entire court on his whim.

She [Lissa Chapman] shifts focus, to look at the impact of London on Anne Boleyn's life, and the subsequent impact on London on this famous former resident - from pub signs to merchandise. It's an interesting approach, and one that the author tackles confidently. It also broadens the appeal of a book ostensibly on the life of one Tudor queen, to attract anyone interested not only in gender history but also in the history and culture of the metropolis.

There are many books, movies and TV shows now about Anne Boleyn or King Henry VIII. So, we all have some knowledge of their lives to a certain degree. But lets face it, the reason why we seem to keep looking into it is because it’s an epic soap opera. I think when we examine Anne Boleyn we see her in the lens of those who wrote history and in this case it’s colored in rumors; It’s hard to decide what it true and what is not. Anne Boleynn in London is not just a bunch of historical, catty courtiers or religious leaders achieving political agendas using heresy or rumors. Every aspect of Tudor life is examined including rumors, therefore giving a better context to place some of what was reported about Anne.

This book has detailed workings of everyday life in the Tudor era Anne’s early life, her family and where she came from and many of the influential people that she interacted with. This also includes the ordinary citizen not just royalty and the upper-crust of society. Great pains are made to describe the people in their cultural context. For instance, The riots of Evil May Day and the inter-woven superstructure of the church and government are laid out so the reader might fully understand the mind-set of individuals at the time. This helps us to understand perhaps the reasoning of King Henry and his distrust of the city of London.

There is a dizzying amount of information in here, but the author is able to thread it in a way that is mesmerizing. The impact of sumptuary laws and how they impact everyday society is covered and seems to be a big theme. Certain people can only wear certain colors and certain pieces of clothing. Everything you wore and did was a reflection of where you stood in society. This is even more imperative in court life, which is covered here: The Inner workings of court and the daily life of Courtiers. This also includes the king and queen and some of the rituals that they were to have been prescribed. For instance, the maternity rituals for the queen are almost bizarre. The queen was basically in solitary confinement or away from men prior to and after birth. The later because she needed to “purify” herself after the ordeal of childbirth.

This is one of those books that you savor. I did not want it to end simply because I felt I was in Tudor England. This is what I really want from a history book, which is a very tall order. Lissa Chapman creates a visual sensation from the very first page that plops you down like a child for story time mode. I loved this! I look forward to seeing what else she publishes.

As featured on Author Translator Blog.

Most definitely the most famous of Henry VIII's wives, Anne Boleyn is as fascinating a character now as she must have been when she first became queen. Lissa's lively biography concentrates on her time in London and how it influenced and changed her, and adds magnificently to our knowledge of this poor, misguided and unfortunate woman. Brilliant.

Author Guest Blog as featured on The Anne Boleyn Files.

Lissa Chapman is a theatre director and historian. She is co-founder and, with Jay Venn, artistic director of Clio’s Company, which specializes in site-specific theatre, usually focusing on London history. One production, Baited Hooks, is set at the time when Anne Boleyn’s marriage was the city’s worst-kept secret. Lissa has also worked in publishing and for the National Trust; she lives in north-east London, and takes great delight in her garden.