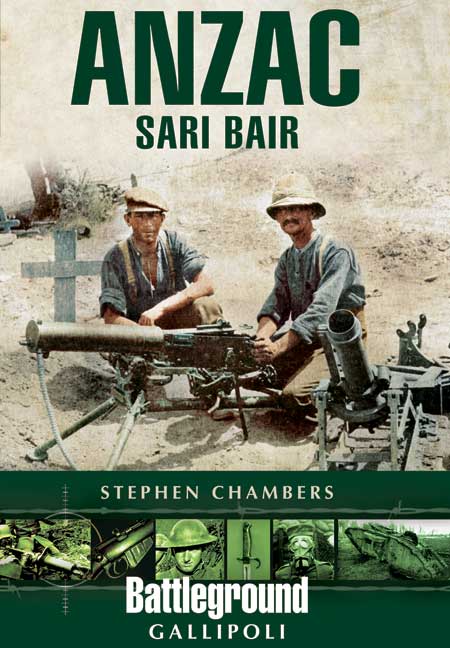 Click here for help on how to download our eBooks
Add to Basket
Add to Wishlist
You'll be £4.99 closer to your next £10.00 credit when you purchase Anzac - Sari Bair. What's this?
Need a currency converter? Check XE.com for live rates

The August Offensive was born out of the failures of the Gallipoli landings and the subsequent battles of late spring and early summer 1915.

General Sir Ian Hamilton, Commander-in-Chief of the Mediterranean Expeditionary Force, chose to play all his remaining cards in this daring and ingenious gamble that he hoped would finally turn the tide in the allies favour and bring his army up onto the heights overlooking the elusive Dardanelles. However the plan's same ingenuity became its eventual undoing. It required complex manoeuvring in tortuous terrain; whilst many of the attacking soldiers were already weakened by the hardships of four months of enduring very poor conditions on the Peninsula.

What played out was heartbreakingly tragic; command failed the bravery and sacrifice of the fighting soldier. This Anzac offensive, fought by a combined force of British, Australian, New Zealand and Indian troops, made infamous places such as Lone Pine, The Nek, Sari Bair, Chunuk Bair, Hill Q, The Farm, Hill 971 and Hill 60. Although tantalisingly close to success, the offensive fell short of its objectives and the attack was ground down to a stalemate - not least the consequence of the inspiring leadership of Mustafa Kemal. Hamilton's gamble had failed.

This is the story, told using a rich mix of letters, diaries, photographs and maps, of Gallipoli's last battles; the forlorn hope for a decisive victory.

As featured in the West Sussex County Times and All About Horsham Magazine.


Chambers has very thoroughly covered this disastrous period in the eight-month's struggle for the Gallipoli Peninsula. This is an excellent read for anyone wishing to expand their understanding of the Gallipoli Campaign.

This book follows the now well established pattern of the Battleground Gallipoli series as authored by the excellent Steve Chambers... The account of the resulting Battle of Sari Bair is wonderfully illustrated with photos and maps that attempt to bring order to the chaos... Chambers presents a series of sensible routes annotated with plenty to see.

Stephen Chambers has already written a series of books on the Gallipoli campaign and this focuses on the plan to capture the Sari Bair range of hills. There is a five page introduction that sets the operation in the context of the overall battle then 154 pages of first quality work, well illustrated and with good maps. The author has walked the battle area extensively and then goes on to produce another 57 pages of maps, photos and advise to those planning a visit. There are also good links to the Turkish side of the battle or Cannakale Savasi as it is known there

The narratives are accurate, concise and well cross referenced to notes , bibliography and recommended further reading. The index is well organised and the Order of Battle covers both sides.

The book is probably aimed at those who have already understood the broad lines of the whole campaign, is a good onward guide for those researching or writing, but an absolute must for anyone planning to visit the battlefield. Stephen Chambers sets a fine standard. The book is extremely readable and even after nearly a century, there is a terrible sadness of so much the men suffered.

The Battleground Series is now well-established with more than 140 titles in print. This addition to the series maintains the very high standard set by the series. It includes a great many images in support of the text. The combination of thorough research and clear writing has produced a comprehensive work that can be used as a battlefield guide, or as a detailed historical account that will grace any WWI library. Highly recommended.