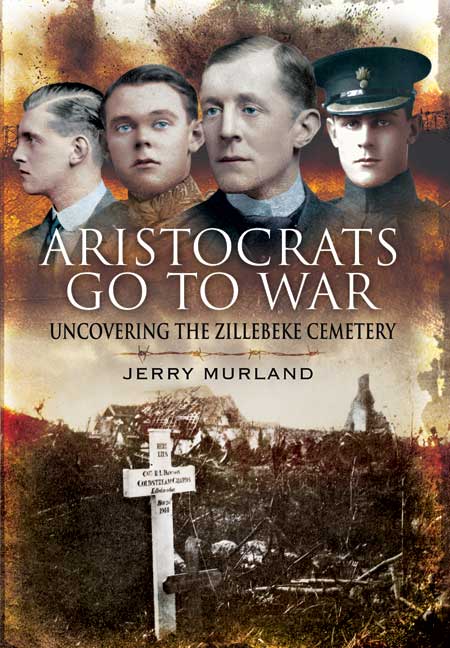 Click here for help on how to download our eBooks
Add to Basket
Add to Wishlist
You'll be £4.99 closer to your next £10.00 credit when you purchase Aristocrats Go to War. What's this?
Need a currency converter? Check XE.com for live rates

Aristocrats Go To War is the account of eighteen officers and men who fought principally with 4th Guards Brigade, the 1st Battalion of the Gloucestershire Regiment and the 7th Cavalry Brigade during the final months of 1914 and are buried in the small churchyard cemetery at Zillebeke, near Ypres. The cemetery, often referred to as the 'Aristocrat's Cemetery', is noted for the high proportion of individuals from their families of the aristocracy and landed gentry who are buried and commemorated therein. These men were part of a regular army that had evolved from nearly a century to reform and reorganization. Some had fought in South Africa in the second Boer War and most were typical of the Edwardian officer corps in their social origins and outlook. Using their personal careers, the book traces the historical and political processes that saw the British Army emerge from being the plaything of the aristocracy to the professional organization it became in the early twentieth century. It takes the reader to France with the British Expeditionary Force in early August 1914 and concludes with the first Battle of Ypres. It was at Ypres these men made the final sacrifice in a battle that, in many ways, determined the outcome of the First World War. This is their story.

Thanks to detailed research and support from the families concerned, the author has unearthed letters, memorabilia and photographs.

Prior to embarking on a teaching career, Jerry Murland served in the Parachute Regiment on operations in the Middle East.

Jerry Murland’s thought provoking book achieves much more with the poignant stories of fourteen officers, an NCO and two private soldiers, who were buried in Zillebeke church cemetery during the last fortnight of the First Battle of Ypres in November 1914.
Jerry Murland, who served with the Parachute Regiment has portrayed these men with warm humanity and nobility. His excellent book ensured that their sacrifice will not be forgotten.

"There is a corner of a foreign field that is forever England"–this book captures the true spirit of Rupert Brooke's words. Its focus is on the lives of the 17 men who are buried and commemorated at Zillebeke, having fought in the First Battle of Ypres. It is known as the aristocrat's cemetery because of the high proportion of nobility and landed gentry it contains. the author has made good use of private papers, personal and war diaries as well as the National Archives. The photographs support the text well.

The early chapters described the Army reforms of Cardwell and Haldane and outline the military training undertaken by the Edwardian officer class. The Public School ethos, Oxbridge and Sandhurst played a major role in this. The battle of Mons and Ypres are covered, with the exploits of the 17 woven into the narrative. Aspects of commemoration through letters home, or to fellow officers and soldiers, war memorials and dedicated stained glass windows in their local churches round out the picture of the men studied.

The churchyard cemetery at Zillebeke, near Ypres, is the resting place of 27 soldiers who lost their lives in the First World War. Some were members of the Canadian Expeditionary Force, killed in the later stages of the war, but 18 are British Army officers who perished during late 1914.
As most of the men were from privileged backgrounds, Zillebeke is often referred to as the 'Aristocrats' Cemetery'. loU-
Jerry Murland has set out to describe life at the start of the First World War through the eyes of these 18 officers. He has a special personal reason for undertaking this research, as his own ancestor William 'Regy' Wyndham of the 1st Life Guards is among the officers buried at Zillebeke.

Several of the Zillebeke men were prolific writers, and a large amount of their letters, diaries, and photographs survived. Murland drew heavily on these sources to present their experiences on the Western Front in autumn 1914.
Carefully indexed, with suggestions for further reading and with plenty of illustrations, Aristocrats Go to War is equally interesting as social history and academic research. Paul Gaskell

This is the fascinating account of eighteen officers and men who fought principally with 4th Guards Brigade, the 1st Battalion of the Gloucestershire Regiment, and the 7th Cavalry Brigade during the final months of 1914 and are buried in the small churchyard cemetery at Zillebeke, near Ypres.

The Zillebeke cemetery is often referred to as 'The Aristocrats' Cemetery' due to the large number of fallen officers who have found their final resting place there. Many lost their lives retreating from Mons and though this graveyard tells a sad tale of the mortality of war it is one of a kind for showing the true spirit of man, able to abandon his titles of distinction and authority and fight side by side as brothers equal. Jerry Murland, ex-parachute Regiment and author of this work, is an avid researcher and in his book he has managed, with the help of the families involved, to retell the stories of twenty-seven of the men who now lay in Zillebeke. Comprising of forgotten letters, maps and photographs Murland as managed to piece together a fascinating, moving but ultimately tragic account of these twenty-seven men, which creaks open a door of insight into the hundreds of other untold stories scattered amongst the headstones. Murland has worked hard to provide as detailed and interesting re-telling as possible, his efforts are worth every read word. Desperation, heroism, brotherhood; what caused these men to discard their authorities and fight together is a noble act of a compassionate man, one which should bring us all closer.

This book commemorates the lives of 18 men who finished their existence in the small churchyard cemetery of St Catarinakerk at Zillebeke near Ypres. They were part of the BEF which had fought at Mons, the Marne and the Aisne and were destroyed in October-Novmeber of 1914. Many of them here were from the wealthy and upper classes, most of them educated at Eton and now rest in what is known today as the 'Aristocrat's Cemetary'. Being educated, many of them wrote letters home regularly and were able to express themselves in prose, some keeping diaries, even though that was not permitted by the rules. Regy Wyndham's diary provides us with one of the few personal accounts of 7th Cavalry Brigade's fight at Zandvoorde on 30th October 1914, which is still cloaked in obscurity. Lord Gordon Lennox's diary covers the retreat from Mons and remains a classic account of the Grenadier Guards at war. Extracts from both of these records are used, as well as information from school magazines, diaries and letters home. The narrative describes their lives before the war, some coming straight from school and others as reservists and regular officers, and cleverly interweaves information from the many and varied sources with descriptions of the fighting. A number of interesting snippets of information come to light, such as the one recorded by Old Hanoverian Capt Cholmeley Symes-Thompson of 2/Grenadier Guards in his diary: "Apparently if one is captured without a sword he (sic) is treated as a private soldier and protests are useless, so I am keeping my sword but having a web equipment like the men so as not to be easily picked out". He died on 17th November 1914. Most of the Old Etonians had been at the school for only three or four years - strange how they could have been instilled with the ethos in such a short time. Their prep schools or private education at home must have had an even greater effect. The final chapter describes the detective work undertaken to trace the many and varied memorials to those early aristocratic young gentlemen.

This book focuses on the World War One burial ground near Ypres, know as 'the Aristocrats Cemetery' dues to the high proportion of officers from the landed gentry and aristocrats interred there. Using letters, memorabilia and photographs, the author tells the stories of 27 fallen soldiers, most being Guards and Cavalry officers, as well as 'other ranks' and six Canadians.

Jerry Murland is a retired headteacher who has written over twenty books and guidebooks coverering the events of the First and Second World Wars. His first book, Aristocrats Go To War, was published by Pen and Sword in 2010 and since then he has gone on the write a number of others, including the Battlelines Guidebooks to the Western Front, co-written with Jon Cooksey. He is currently writing an account of the Battle of the Ypres-Comines Canal 1940, part of eight Battleground Europe books which cover the France and Flanders campaign of 1940.