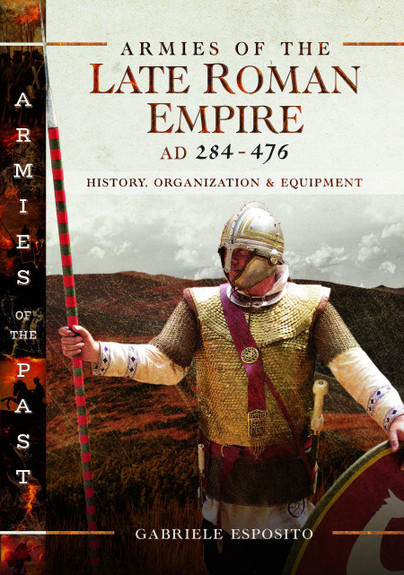 Click here for help on how to download our eBooks
Add to Basket
Add to Wishlist
You'll be £4.99 closer to your next £10.00 credit when you purchase Armies of the Late Roman Empire AD 284 to 476. What's this?
Need a currency converter? Check XE.com for live rates

This guide to the Late Roman Army focusses on the dramatic and crucial period that started with the accession of Diocletian and ended with the definitive fall of the Western Roman Empire. This was a turbulent period during which the Roman state and its armed forces changed. Gabriele Esposito challenges many stereotypes and misconceptions regarding the Late Roman Army; for example, he argues that the Roman military machine remained a reliable and efficient one until the very last decades of the Western Empire. The author describes the organization, structure, equipment, weapons, combat history and tactics of Late Roman military forces. The comitatenses (field armies), limitanei (frontier units), foederati (allied soldiers), bucellarii (mercenaries), scholae palatinae (mounted bodyguards), protectores (personal guards) and many other kinds of troops are covered. The book is lavishly illustrated in colour, including the shield devices from the Notitia Dignitatum. The origins and causes for the final military fall of the Empire are discussed in detail, as well as the influence of the ‘barbarian’ peoples on the Roman Army.

The book is extensively illustrated, mostly in full color with many photographs using Roman Army reenactors to illustrate what the troops looked like based on available evidence. There is also a detailed study of Roman shield designs exhibiting the wide variety of symbols and decorations used by the troops to distinguish themselves on a battlefield.

As with Gabriele Esposito’s other books, I really enjoy the way he has illustrated the arms, armour, dress and organization of the subject, so much so that I am looking forward to his next book, Armies of Celtic Europe 700 BC to AD 106. I highly recommend Armies of the Late Roman Empire AD 284 to 476 to any with an interest in this period.

Armies of the Late Roman Empire, a volume in the series “Armies of the Past”, is an excellent introduction to the subject for the novice, and seasoned students of the subject may find it of use as well.

A superbly well-illustrated book which historians, re-enactors and war gamers will find invaluable to understanding and picturing the Roman forces of this dynamic period. The author sets the scene for the changes within the period and shows how the political responses affected the military structures, tactics, clothing, equipment and weaponry of the Late Roman armies.

Every once in a while a book comes along where I go “Wow!” – this is one of them. Mainly because of the splendid illustrations, scores of high quality colour photos of reenactors in authentic Late Roman gear (“uniforms” does not quite sound right). Plus pages upon pages of shield designs, in full colour. This book packs a lot of bang for the buck.

In its final and turbulent 200 years, the armies of the Western Roman Empire underwent a radical change to adapt to the new threats posed by the large cavalry forces which were threatening the frontiers. This book describes the composition of the legions during the High Empire, and shows how their uniforms, weapons and tactics evolved with the changing times, as they moved away from the traditional clash of heavy infantry battles which had forged the empire. It is wonderfully decorated throughout with large, clear, colour photographs of re-enactors in the dress of a very broad range of predominantly heavy and light infantry troop types, each displaying different armour styles and weapons. It concludes with an Order of Battle of the Western and Eastern Empires, and provides illustrations of the veritable catalogue of shield emblems which were used by individual units. Without doubt this is an essential book for anyone involved in living history or modelling.

This beautifully illustrated book depicts the very different arms and armour of the late Roman Empire as Roman soldiers adapted to the challenges of the rising barbarian armies. - Very Highly Recommended

This is an excellent book, lavishly illustrated with full colour drawings and photographs of re-enactors, showing a vast array of equipment, weapons and even food used by the Roman army in the given period.

The book is divided into 4 sections with a couple of appendices. It has a brief overview, two chapters on the major reformations and the final chapter, which is the meat of the book, covers all the various equipment.

Each section is, as I mentioned, very well illustrated and these are what makes this book stand out above the other sort of books like this. It has a wealth of coverage for the historian, modeller or general enthusiast. The text is informative without getting bogged down and easy to read

I have no problem giving this book 5 stars.

The combination of helpful images, historical insights, and careful analyses makes this book a highly valuable contribution to the existing literature.

Easy to read and would be helpful to those new to the study of the Roman army.

If the structure and disposition of Roman armies is your area of interest, it's a vivid and indispensable guide.