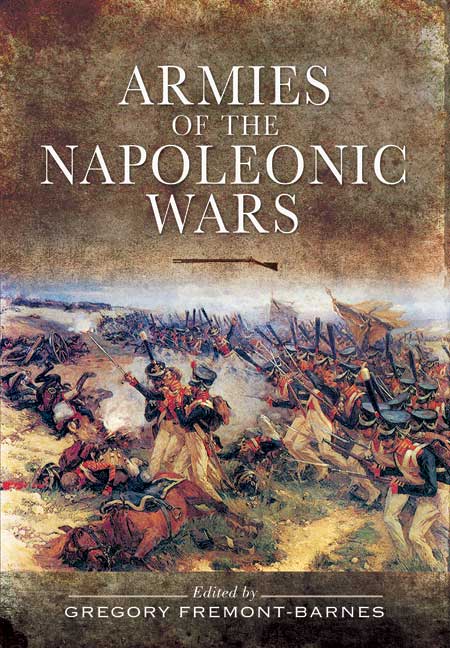 Armies of the Napoleonic Wars (Kindle)

Click here for help on how to download our eBooks
Add to Basket
Add to Wishlist
You'll be £4.99 closer to your next £10.00 credit when you purchase Armies of the Napoleonic Wars. What's this?
Need a currency converter? Check XE.com for live rates

The armies of the Napoleonic Wars fought in a series of devastating campaigns that disturbed the peace of Europe for twelve years, yet the composition, organization and fighting efficiency of these forces receive too little attention. Each force tends to be examined in isolation or in the context of an individual battle or campaign or as the instrument of a famous commander. Rarely have these armies been studied together in a single volume as they are in this authoritative and fascinating reassessment edited by Gregory Fremont-Barnes.

Leading experts on the Napoleonic Wars have been specially commissioned to produce chapters on each of the armed forces that took part in this momentous era in European history. The result is a vivid comparative portrait of ten of the most significant armies of the period, and of military service and warfare in the early nineteenth century. The book will be essential reading and reference for all students of the Napoleonic era.

Covers the armies of Austria, Britain, the Confederation of the Rhine, the Duchy of Warsaw, France, the Kingdom of Italy, Portugal, Prussia, Russia and Spain.

Editor Gregory Fremont-Barnes has an established reputation as an authority on nineteenth-century military and naval history. He was the editor of The Encyclopedia of the French Revolutionary and Napoleonic Wars and the Encyclopedia of the Age of Political Revolutions and New Ideologies 1760-1815. His many other books include The Indian Mutiny 1857-58, The Wars of the Barbary Pirates, Trafalgar 1805, Nelson’s Sailors, The Boer War 1899-1902, The Peninsular War 1807-14, The Fall of the French Empire 1813-14 and Napoleon Bonaparte.

..this is a well-constructed work which offers plenty of information, presented in a readable style. To this reviewer, the chapter on the Confederation of the Rhine by John H. Gill is alone worth the purchase price. Recommended

The level of detail provides feels about right to me - enough is provided to give us a clear idea of the structure of each army, without getting bogged down in minutia. This is a useful reference work for anyone with in interest in the armies of the Napoleonic Wars.

…its provides enough detail to answer most general questions on any given army of the era. One feature that I really found useful was the ten page “Further Reading” appendix that provides the reader with a list of sources for him to conduct his own research. Sources in this section are divided by topic, providing the reader with a ready-made list for each army! Since I know of no individual who is an expert on all armies of the Era, Armies of the Napoleonic Wars should be in the library of anyone interested in the Napoleonic Wars or military history. It will be a reference book that will be turned to time and again.