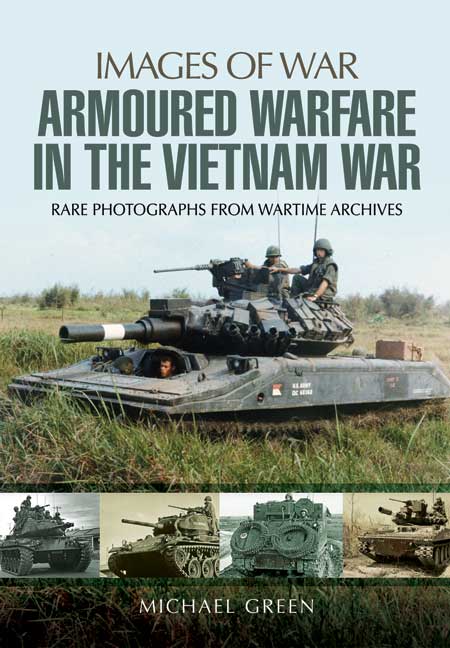 A vast photographic archive of the vehicles involved in the conflict - a definite “must have” for anyone interested in the history of the Vietnam War and post-WW2 armored warfare. Great value for money - The Armor Journal
You'll be £4.99 closer to your next £10.00 credit when you purchase Armoured Warfare in the Vietnam War. What's this?
Need a currency converter? Check XE.com for live rates

Historian and collector Michael Green shows in this fascinating and graphically illustrated book that the two wars that engulfed Indochina and North and South Vietnam over 30 years were far more armoured in nature than typically thought of. By skilful use of imagery and descriptive text he describes the many variants deployed and their contribution.

The ill-fated French Expeditionary Force was largely US equipped with WW2 M3 and M5 Stuart, M4 Sherman and M24 light tanks as well as armoured cars and half-tracks. Most of these eventually went to the Army of the Republic of Vietnam but were outdated and ineffective due to lack of logistics and training.

The US Army and Marine Corps build-up in the 1960s saw vast quantities of M48 Pattons, M113 APCs and many specialist variants and improvised armoured vehicles arrive in theatre. The Australians brought their British Centurion tanks.

But it was the Russians, Chinese and North Vietnamese who won the day and their T-38-85 tanks, ZSU anti-aircraft platforms and BTR-40 and -50 swept the Communists to victory.

This fine book brings details and images of all these diverse weaponry to the reader in one volume.


A definite 'must-have' for anyone interested in the history of the Vietnam War and post-WWII armoured warfare.

[Images of War: Armoured Warfare in the Vietnam War] is a definite must-have for anyone interested in the history of the Vietnam War and post-WWII armoured warfare. It is great value for money and would be a great addition to the library of any military historian, collector or scale modeller.

A vast photographic archive of the vehicles involved in the conflict - a definite “must have” [for anyone interested in the history
of the Vietnam War and post-WW2 armored warfare]. Great value for the money

The armed conflicts in South-East Asia 1945-1975 included a greater presence of armoured fighting vehicles than previously thought, and the author sets out to present the full range of such vehicles in this new and profusely illustrated title.

The author has documented this progress with some outstanding images, a few from museums that have restored armour of the type employed in Vietnam. Many readers will be surprised by the variety of armoured vehicles serving during the war and the illustration includes some full colour images. Recommended!

New release in the Images of War Series from Pen & Sword Books come on a regular basis, giving a good indication on the popularity of the format. This time they have turned to armour in the Vietnam War, a topic which has long been an interest of mine, and this one does not disappoint. ... [This is] an excellent collection of pictures to illustrate the incredible variety of armoured vehicles that were used in Vietnam between the end of WWII and the fall of South Vietnam in 1975. Lots of details to interest the modeller and a good overview of all these different types in use in the largely jungle environment. All in all another fine addition to the Images of War Series.