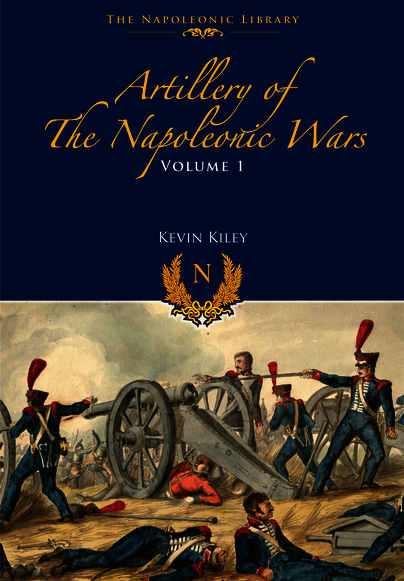 Add to Basket
Add to Wishlist
You'll be £25.00 closer to your next £10.00 credit when you purchase Artillery of the Napoleonic Wars. What's this?
+£4.50 UK Delivery or free UK delivery if order is over £35
(click here for international delivery rates)

Napoleon was an artilleryman before he was an emperor. He understood the power and effectiveness of cannon and their ability to pulverise defences, reduce fortresses and destroy attacks. And, in return, the guns won Napoleon battles. In this detailed study Kevin Kiley looks at artillery in use throughout the Napoleonic period. He examines Napoleon's own artillery as well as that employed by his enemies, and he evaluates the gunners' contribution to warfare in the period. By looking at particular battles in detail, Kevin Kiley shows just how the effective employment of artillery could tip the scales of victory. Artillery of the Napoleonic Wars reveals much of the technical aspects of gunnery during the period - how guns were placed, their range, what calibres were preferred, how artillery operated - he also looks at many of the personalities involved and the difference between gun gunnery and mediocre artillery. He examines French artillery, including that of the Imperial Guard, and compares it to that of Britain, Russia and Austria. Illustrated with beautiful line drawings and rare contemporary plates this unique book reveals a whole new dimension to the Napoleonic period. Based on years of research into regulations of the period, eyewitness accounts of artillerymen and material culled from official reports this is a definitive account. Kevin Kiley, a life-long student of the Napoleonic period, served for many years as an artillery officer and is currently a history teacher.

A magnificent work on the Napoleonic period.

The detailed appendices are excellent as are the references, the bibliography and the glossary. This is an authoritative study and is the reference book of my choice in helping me to answer the many artillery-related enquiries of this period that I receive, I can praise it no higher.

In this study, the author looks at the development and use of artillery in the Napoleonic period. He examines Napoleon's own artillery, as well as that employed by his enemies and evaluates the gunners' contribution to the warfare of the period. By looking at particular battles in detail, the author shows how the effective employment of artillery could tip the scales of victory.

As well as uncovering many of the personalities involved, this book reveals much of the technical aspects of gunnery during the Napoleonic era - how guns were placed, their range, which calibres were preferred and how artillery operated. The author also examines the French artillery in detail, including that of Napoleon's Imperial Guard, and compares it to that of Great Britain, Russia and Austria.

Well illustrated with 26 monochrome illustrations, over 50 line drawings, the text also features 17 tables providing additional information on a variety of subjects such as Gribeauval artillery pieces and effectiveness of round shot. Further, there are 15 Appendices intended to help the reader follow the intricacies of late 18th and early 19th century artillery. A bibliography and an index round off a work which is both full of technical detail and yet a joy to read, which in itself is a rare combination.