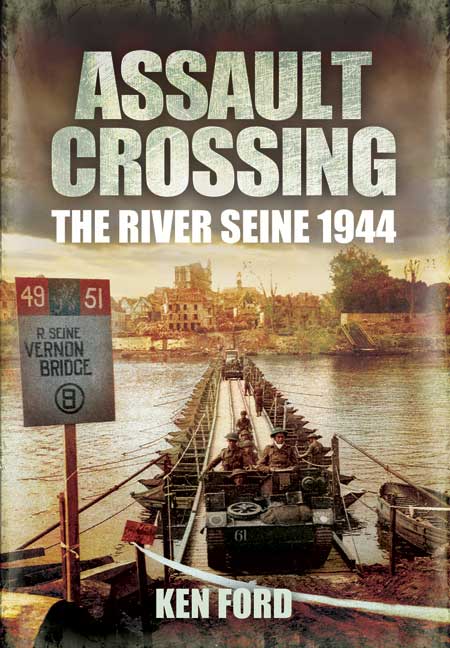 Add to Basket
Add to Wishlist
You'll be £19.99 closer to your next £10.00 credit when you purchase Assault Crossing. What's this?
+£4.50 UK Delivery or free UK delivery if order is over £35
(click here for international delivery rates)

Assault Crossing – Ken Ford’s classic account of this critical battle - is the story of one British division pitted against one German division. On one side, a fully equipped, battle-hardened unit made up of soldiers from the ancient Kingdom of Wessex, backed by some of the best artillery in the world and supported by tanks. On the other side, a much-depleted, second-rate, static division of men of various nationalities conscripted to fight a war for Germany that was already lost. On paper the British were assured of success, but between the two opposing armies lay the Seine – 680 feet of open water, overlooked by high chalk cliffs riddle with defensive strongpoints. The Germans were waiting.

In hindsight, the battle was described as an epic operation and used as an example to train future generations of soldiers. In reality, as with most battles, it was something of a shambles, lurching from crisis to crisis until the eventual bridgehead was secured.

In his graphic narrative Ken Ford gives a fascinating insight into the planning of the operation and the confusion of the battlefield, and he records, using eyewitness testimony, what the battle was really like for the soldiers who were there.

…this book is an interesting examination of how a well drilled army can successfully cope with setbacks and still achieve its objectives. The book was written while many of the veterans were still alive, and so Ford is able to include many eyewitness accounts of the action, which give it an immediacy often lacking in more modern books.

Assault Crossing is the sotry of one British division pitted against a German division. One one side, a battle-hardened unit, backed by some of the best artillery in the world and supported by tanks. One the other side, a much-depleted, second-rate, static division of men of various nationalities conscripted to fight a war for Germany that was already lost. On paper the British were assured of success, but between the two apposing armies lay the Seine. As the author reveals, the Germans were waiting.