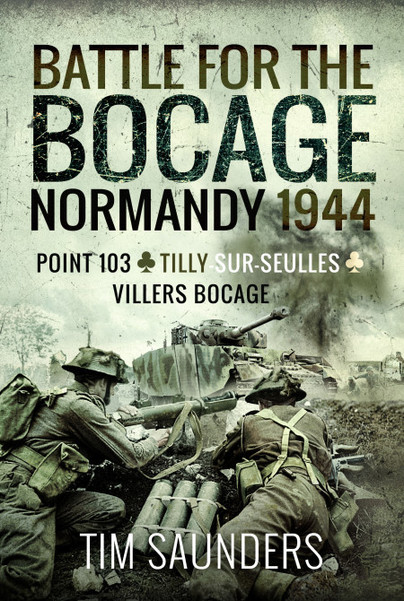 Add to Basket
Add to Wishlist
You'll be £25.00 closer to your next £10.00 credit when you purchase Battle for the Bocage, Normandy 1944. What's this?
+£4.50 UK Delivery or free UK delivery if order is over £40
(click here for international delivery rates)

This new book on the fighting around Point 103, Tilly Sur-Seulles, and Villers Bocage takes the reader into the thick of the hard-fought battles to break out of the Normandy beachheads. Tim Saunders clearly knows the terrain well, and understands the doctrine, equipment, and mindset of the day. His knowledge enables him to weave the relevant maps, documents, pictures and commentary into what is a well-rounded chronology of the British and Canadian Army’s struggle against determined German resistance. The individual actions are broken down into manageable, well-illustrated chapters that make for absorbing reading. The sketch maps and anecdotal accounts add extra depth to the narrative. If you are looking for some insight into the complexities of bocage battles, look no further. This new book is pitched at just the right level for the casual reader or the Normandy buff. It certainly brings the claustrophobic and attritional nature of the fight to win - Great Value.

If you have an interest in the campaign in North West Europe, and particularly the events surrounding British units in the first couple of weeks that followed on from the landings themselves, this is an interesting read.

A must-buy for military libraries.

This offering from Pen and Sword is a great read for anyone wishing to read about the fighting during the early period after D-Day, covering the issues encountered and how they were defeated or not and helps bring to life the lives of the men fighting at this time. Richly embellished with a mixture of period photographs and diagrams that better help you understand some of the text.

If you are looking for some insight into the complexities of bocage battles, look no further. This new book is pitched at just the right level for the casual reader or the Normandy nut. It certainly brings the claustrophobic and attritional nature of the fight to life - Great Value.

This book is not easy to put down, it’s a real page turner. You may of course reflect that when you finish it the campaign will be much clearer to you than it was at the time to any of those involved from Army commander to Tommy Atkins. The fog of war has been blown away by Tim Saunders.
We highly recommend this great read.

Another excellent book from Tim Saunders that forensically dissects the action and is well supported by maps and images. Recommended.