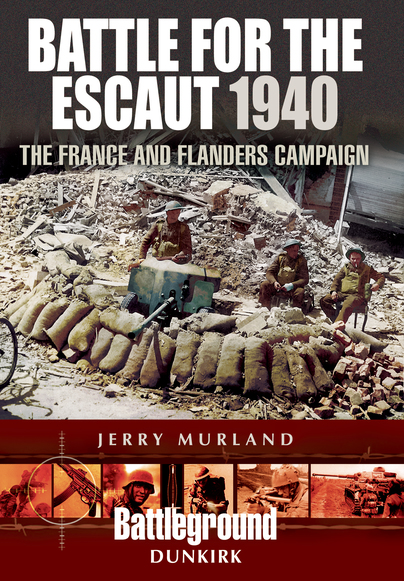 Battle for the Escaut (Kindle)

The France and Flanders Campaign 1940

Click here for help on how to download our eBooks
Add to Basket
Add to Wishlist
You'll be £4.99 closer to your next £10.00 credit when you purchase Battle for the Escaut. What's this?
Need a currency converter? Check XE.com for live rates

On 10 May 1940 the British Expeditionary Force (BEF), under the command of Lord Gort, moved forward from the Franco-Belgian border and took up positions along a 20-mile sector off the River Dyle, to await the arrival of the German Army Group B. Their expected stay was considerably shorter than planned as the German Army Group A pushed its way through the Ardennes and crossed the Meuse at Sedan, scattering the French before them. Little did the men of the BEF realise that the orders to retire would result in their evacuation from Dunkirk and other channel ports.

The line of the River Escaut was seen as the last real opportunity for the Allied armies to halt the advancing German Army, but the jigsaw of defence was tenuous and the allied hold on the river was undone by the weight of opposing German forces and the speed of the armoured ‘Blitzkrieg’ thrust further south. As far as the BEF were concerned, the Battle for the Escaut took place on a 30-mile sector from Oudenaarde to Bléharies and involved units in a sometimes desperate defence, during which two Victoria Crosses were awarded.

This book takes the battlefield tourist from Oudenaarde to Hollain in a series of tours that retrace the footsteps of the BEF. With the help of local historians, the author has pinpointed crucial actions and answered some of the myriad questions associated with this important phase of the France and Flanders campaign of 1940.

The book contains the usual helpful maps. An absorbing read.

... This is a well-researched book, around a relatively little know action in the fight of France. It is well laid out and the tour descriptions are interspersed with lots of relevant historic and modern photos. The overview of the three British Corps involved in the fighting is very well done, and the Order of Battle provided for them are amongst the more comprehensive I have seen. These Orbats are especially surprising given the small size of the book, which should fit easily into most pockets on walking trousers. Murland's writing style is both pleasant and effective, making for an easy read, and he has chosen his excerpts well. The author seems to have taken an objective view of what happened, which is always good to see...

... Overall, this was an interesting little read which would make for the basis of an interesting touring break away with like-minded friends, and beer!

The Battle for the Escaut 1940 provides both excellent history, and is a superb guidebook to some of the important battlefields of the 1940 campaign. Highly recommended.

Chapter One is an twelve page introduction called ‘The First Steps to War’. It is brief, and states wrongly that the Munich Agreement was in 1936, when it was in fact in 1938. There is a brief overview of the higher formations and their commanders. Chapters Two, Three and Four cover the actions of the three corps level formations on the Escaut Line, with Chapter Five about the role of artillery. Chapter Six provides details of four car tours and two walking tours of the area. The four chapters on the historical actions in May 1940 are interesting and informative, and obviously focus on just the actions on the Escaut Line.

The car tours and walking routes are very useful if you intend to visit the area. They provide much detailed information, which should make visiting the area relaxing and logical. Directions are included, and places to stop for a specific event or reason. The book contains several useful, interesting and relevant photographs, which assist in understanding the nature of the area and what a visitor will see some seventy-six years after the event.

This is a welcome addition to Pen & Swords ever expanding battleground series of Guide Books.

This useful new guide widens the readers scope and highlights some of the less well known BEF actions fought along the lines of the Escaut.
Certainly worth investing in a copy if you are new to the campaign and fancy broadening your 1940 horizons.

This is a welcome addition to Pen & Sword’s ever-expanding Battleground Series of Guide
Books. Many members are of course familiar with the well-trodden Retreat to Dunkirk itineraries that conveniently run from Ypres back to Bray Dunes and on to cross-channel terminals at
Calais. This useful new guide widens the readers scope and highlights some of the less well known BEF actions fought along the line of the Escaut. The standard battleground template has been enhanced by the author, the balance of maps, pictures and anecdotal accounts is above average. Certainly, worth investing in a copy if you
are new to the campaign and fancy broadening your
1940 horizons.

This book is part of the Pen & Sword Battleground series of which there are over 100 books in the series. If you want to learn of the BEF in the days prior to Dunkirk then this is an excellent start for that with explanations for why certain actions took place. Well worth getting g a copy if you are thinking of going over that ground.


A good, easy read which would hopefully entertain as well as inform the reader – it did for me.

A valuable addition to the popular Battleground series that
provides a lavishly illustrated guide to a European battleground.
This new guide covers the France and Flanders Campaign of 1940.
The primary target readership will again be those intending to
visit the battleground, but the range of information is also very
applicable to any reader with an interest in WWII and the Battle
of France. Much Recommended.