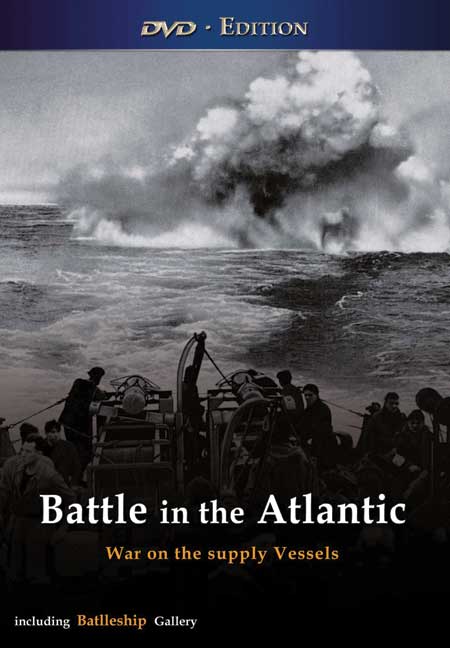 Battle in the Atlantic DVD (DVD)

Add to Basket
You'll be £16.99 closer to your next £10.00 credit when you purchase Battle in the Atlantic DVD. What's this?
+£4 UK Delivery or free UK delivery if order is over £30
(click here for international delivery rates)

The Atlantic Ocean was during the second World War one of the most important, if not the most crucial battleground. The great Allied convoys transporting millions of tons of vital war material supplies across the Atlantic to England and the North Sea to the Russian ports. The story of the Battle of the Atlantic was not only written by the German U-boats and their opponents, the convoys. The big battleships "Bismarck", "Hood", "Scharnhorst", "Gneisenau", "Rodney," "King George V" and "Tirpitz" Leave this eventful chapter in military history. Aircraft carriers, cruisers, destroyers, corvettes, and numerous smaller patrol vessels - they all had a considerable share in the outcome of the battle. The aircraft was during the course of the war the dominant and decisive instrument of modern naval warfare. This documentary shows inter alia previously unpublished private footage of former U-boat driver.

Rare and excellent footage of warships of all types involved in the struggle for domination of the Atlantic, from the East Coast of America to the paths taken by the Arctic Convoys on their way to Murmansk. The initial probes of German battleships and the efforts which eventually silenced their great threat are documented, but the main thrust of the narrative is, as it must be, concerned with the U-Boat campaign which brought so many German successes until improved Allied technology and strategy gradually eliminated their menace from the ocean.