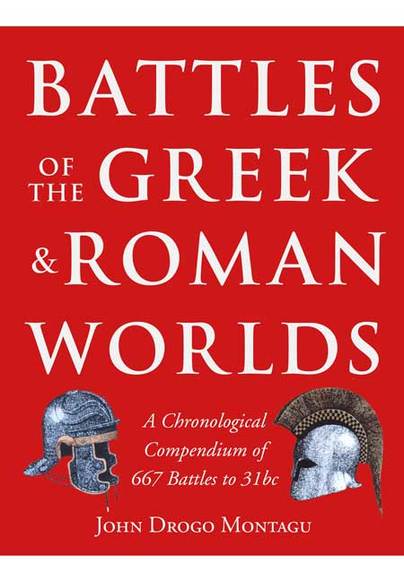 Battles of the Greek and Roman Worlds (Kindle)

Click here for help on how to download our eBooks
Add to Basket
Add to Wishlist
You'll be £4.99 closer to your next £10.00 credit when you purchase Battles of the Greek and Roman Worlds. What's this?
Need a currency converter? Check XE.com for live rates

This comprehensive reference book on the battles of the ancient world covers events from the eighth century BC down to 31BC, when Octavian defeated Antony and Cleopatra at the battle of Actium. The author presents, in an exciting and vivid style, complete with battle plans and maps, all of the land and sea battles of the Greek and Roman worlds, based on the accounts by historians of the time.

You won't be able to design a wargame scenario from the information in this book, but you'll find loads of inspiration!

If you are interested in warfare of Greek and/or Roman times—and, let’s face it, if postings on blogs, articles in magazines, history documentaries and the survey in Ancient Warfare (vol 1 issue 1, 2007) are anything to go by then that includes most wargamers/military history buffs and everyone who has an interest in ancients—then this book should be your first port of call to decide on your next ancients project.

The author has brought together the works of ancient historians and produced an impressive compendium that is both exciting and vivid. There is humour and candour and the chronological order of the battles will be a great help to those embarking on a study of ancient warfare and politics. There is some very good illustration with maps and battle formations. Both land and sea battles are covered. This paints a full colour picture of ancient warfare and the result is excellent.

When schools taught Latin and Ancient Greek as primary subjects, the study of ancient history was a natural by-product. With the changes to curricula during the last fifty years, Latin and Ancient Greek have been languages that no longer had the same priority, giving way to modern languages and other subjects. That inevitably reduces the number of people studying ancient history and those that continued became reliant on the work of modern historians, writing in modern languages, That is a great shame because Greek and Roman history is vibrant and exciting. It is essentially a story of warfare and politics but there is nothing dry and dusty about it.

What the author has done very well is to combine histories written by ancient historians with modern research. The battles may be presented in chronological order, but there is a detailed index that enables the reader to chose where to start. As many will be using this book as a guide and context for other books, they will most probably start at one point in history and initially cover a relatively short period in Greek or Roman history. In that, this book will be a useful guide and reference. However, there is a strong case for starting with this book and reading through the order of battles to the final pages, turning the process around and then reading further about the periods that most interest.

Each battle is described and although the description is necessarily concise, it does provide a real flavour for each engagement. Its also fun to read, which adds to the argument that this is a good starting point and well worth reading from start to finish.