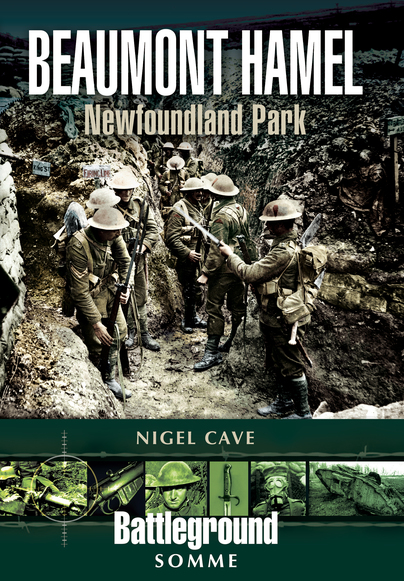 Click here for help on how to download our eBooks
Add to Basket
Add to Wishlist
You'll be £4.99 closer to your next £10.00 credit when you purchase Beaumont Hamel. What's this?
Need a currency converter? Check XE.com for live rates

Designed to act as a diversion to the 'big push', Gommecourt was an attempt to force the Germans to commit their reserves to the front line before the main battle took place. This Battlefield Guide tells the reader what happened and relates it to the ground as it now stands today.

Another of the soft-cover books from Pen and Sword in their Battleground Europe series of battlefield guides, this one was originally published back in 1994. The fact that this makes the third time it has been reprinted since then gives a good idea to the popularity of the series.

The Somme is perhaps one of the best known battlegrounds of WW1 for the British Army, and it is the centenary of the battle this year of course. It covered a wide area and saw fighting from 1916 through to the end of the war. This particular guide covers the area around Beaumont Hamel, in the north-east corner of the battlefield. The way this guide is structured is a little different to some others in the series that I have seen. This one essentially covers the events in a chronological order, and as the history is described, along with records and diary entries from those who were there, it is illustrated with both archive photos and modern day pictures showing what is there to be seen today. So the pointers on what to see of particular places and events are included within each chapter, though with some general touring ideas at the end of the book.

As the author points out at the start of the book, Beaumont Hamel is a little different from much of the rest of the Somme battle. Rather than an ongoing grind, the fighting around the village lasted for a few days at a time in a number of individual, fierce clashes. One of the places to draw in the visitor today is the establishment of the Newfoundland Park. On July 1st 1916 the then only regiment to have come from Newfoundland suffered terrible casualties and as a result, their government decided to buy an eighty acre site which included much of the ground over which they had attacked. The trench park they established is one of the best to be found on the Western Front and attracts many visitors to the area. It remains a lasting memorial to all those who gave their lives that day in July 1916.

The last three chapters give some ideas for a couple of car tours and then a walking tour. Before those though, there are 12 chapters which give the background to the battle of the Somme, and the specifics surrounding Beaumont Hamel. So maps and history of the attacks which took place on July 1st 1916, and then again on November 13 are detailed. In particular is looks at the 29th Division fighting around the Y Ravine, and then attacks and dispositions involving the 51st Highland Division, the 152 Brigade in particular, and the 63rd Royal Naval Division. As well as the two major clashes, there was also a significant Trench Raid on 8 June 1918. One other section which I would always refer to are the details of the various cemeteries and memorials that can be found in the area. I have to say that when visiting the old battlefields, I always make a point of trying to stop and visit each one that I pass if I can, so these are useful pointers.

These Battlefield guides are well presented and are a valuable resource to have in the car with you if you travel in this area of France. In my view they also provide good value for money and are well worth having.