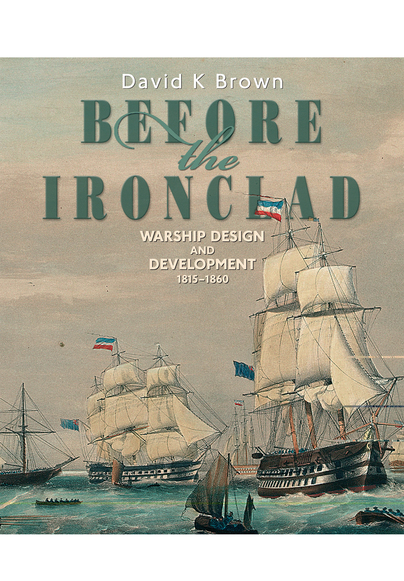 Before the Ironclad (Hardback)

Add to Basket
Add to Wishlist
You'll be £40.00 closer to your next £10.00 credit when you purchase Before the Ironclad. What's this?
+£4.50 UK Delivery or free UK delivery if order is over £35
(click here for international delivery rates)

In the massive revolution that affected warship design between Waterloo and the Warrior, the Royal Navy was traditionally depicted as fiercely resisting every change until it was almost too late, but these old assumptions were first challenged in this authoritative history of the transition from sail to steam. Originally published in 1990, it began a process of revaluation which has produced a more positive assessment of the British contribution to the naval developments of the period. This classic work is here reprinted in an entirely new edition, with more extensive illustration.
Beginning with the structural innovations of Robert Seppings, the book traces the gradual introduction of more scientific methods and the advent of steam and the paddle fighting ship, iron hulls and screw propulsion. It analyses the performance of the fleet in the war with Russia (1853–1856), and concludes with the design of the Warrior, the first iron-hulled, seagoing capital ship in the world. The author presents a picture of an organisation that was well aware of new technology, carefully evaluating its practical advantage, and occasionally (as with its enthusiastic espousal of iron hulls) moving too quickly for the good of the service. Written by an eminent naval architect, Before the Ironclad is both a balanced account of general developments, and an in-depth study of the ships themselves.

The author has provided a fascinating and compelling account of this period of development and with great authority. This book is important as a study in the development of naval architecture, but it is also important in providing a clear understanding of how, in half a century, warship design moved so far from the dominant architecture of the previous 200-300 years. In comparing a Great Castle ship of the early 16th Century with a three decker of the 19th Century, basic construction is remarkably similar. The cover price of this fine book may restrict the potential readership but, that aside, this book is easy to read and does not require either great knowledge of naval architecture or great technical knowledge. The many high quality images help greatly in understanding the text for those who may not have strong technical knowledge, and they also provide all of the information to satisfy the enthusiast and professional.

The text goes into plenty of technical details and is supported by a large number of tables and quotes from contemporary documents, but despite that it remains very readable. The text is supported by excellent plans and pictures, including a mix of drawings, paintings and early photographs.

This is a valuable study of a previously unappreciated period that has triggered a revival of studies in the period, but that still remains an essential read for anyone interested in this period.

This is the profusely illustrated, beautifully produced and very detailed story of British warship design and construction 1815-1860, from the sailing Wooden Wall to the Ironclad with its steam reciprocating engine and screw propulsion...

... If you want an informed and detailed survey of the transition from sail to steam and wood to iron in the RN’s warships you cannot do better than this, nor have a more knowledgeable guide.

This classic work is now reprinted in an entirely new edition, with more extensive illustration.

David Brown’s books represent the culmination of over 180 years of naval engineering design and development within the Royal Navy and by default the Royal Australian Navy. They represent the outstanding achievements of British sea power mostly at a time when the power to rule the waves was supreme....

...Some readers may find parts of Before the Ironclad too technical or dry. It is true that some may get lost from time to time in the detail but this can mostly be ignored without losing track of the main story. A number of the Appendices are designed for those with at least a college level in mathematics.

Before the Ironclad should be compulsory reading for everyone involved in naval warship acquisition, upkeep, and modernisation. It deserves a permanent place on a modern naval professional’s bookshelf. Hopefully Seaforth will also prepare new editions of the remaining books in the series.

Originally published in 1990, this classic work has been reprinted, with more extensive illustrations. Beginning with the structural innovations of the gifted Robert Seppings, the book traces the gradual introduction of more scientific methods and the advent of steam and the paddle fighting ship, iron hulls and screw propulsion. It analyses the performance of the fleet in the war with Russia (1853-1856), and concludes with the design of the Warrior, the first iron-hulled, seagoing capital ship in the world.

A gripping and authoritative history of the transition from sail to steam in the Royal Navy.