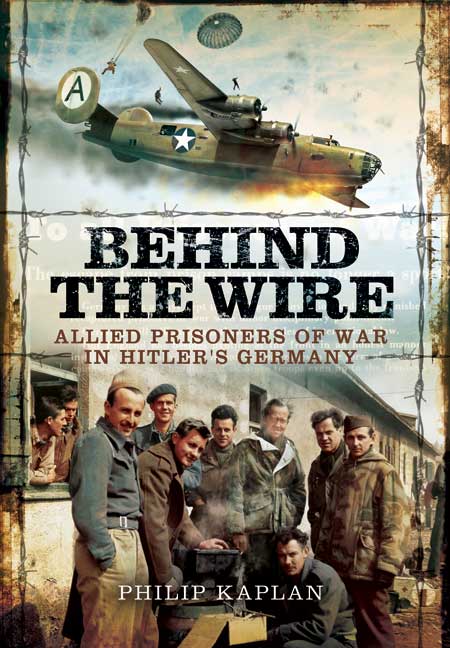 Behind the Wire (Kindle)

Click here for help on how to download our eBooks
Add to Basket
Add to Wishlist
You'll be £4.99 closer to your next £10.00 credit when you purchase Behind the Wire. What's this?
Need a currency converter? Check XE.com for live rates

Philip Kaplan presents us here with a riveting account of the Allied experience behind enemy lines, detailing the trials and tribulations experienced by the British and American airmen who were shot down in European skies during World War Two, to be incarcerated 'behind the wire' in enemy camps. With eloquence and a clear enthusiasm for the subject at hand, the author describes how various individuals adjusted to their incarceration. Whilst some set their minds resolutely on escape, and dreamt up plots and plans to achieve this end, others retreated, away from their comrades and into them selves as the grim reality of their predicament pushed them ever deeper into debilitating depression. Others were determined that they would not waste their time; affected by the quick and brutal deaths they had witnessed during their wartime careers, they were unwilling to sit idle. Theatres, recreational areas, and other camp facilities were designed and built – a creative spur that made their time behind the wire, and the quality of life of their fellow comrades, infinitely more bearable.

These small acts of enterprising heroism, alongside the harrowing tales of those who crumpled under the weight of their prison reality, combine to create a complete picture of this collective experience. The stories seep from behind the wire, and illuminate this area of World War Two history. Kaplan's skill lies in informing the reader of the facts of this history with both honesty and reverence.

It takes the reader from those desperate first hours when ones aircraft is downed, or when the descent is made to parachute.

Behind the Wire superbly describes the typical experience of Allied prisoners of war in Germany. The chapters take a chronological approach by describing each phase confronting a prisoner, starting with their capture, interrogation, arrival in the camp and what they would encounter there, in terms of their fellow prisoners, guards, meals, and the wide variety of entertainments which were devised as a means of diverting the mind from what would otherwise be an extremely tedious and uncertain existence. Other chapters touch on escape, the terrible conditions which many endured on the long march of 1945, their eventual liberation, and an area which is often overlooked; returning to civilian life and the difficulty of adjusting to a world with which they had little in common. Each chapter is generously laced with veterans accounts, and their rich insights are invaluable because researching prisoner of war camps is a notoriously difficult area, and uncovering any more than the most basic information on specific individuals is next to impossible. The words of ordinary prisoners do much to fill this vacuum, and so for anyone who wishes to understand what typical life behind the wire was like, there really is no need to look any further than this book.