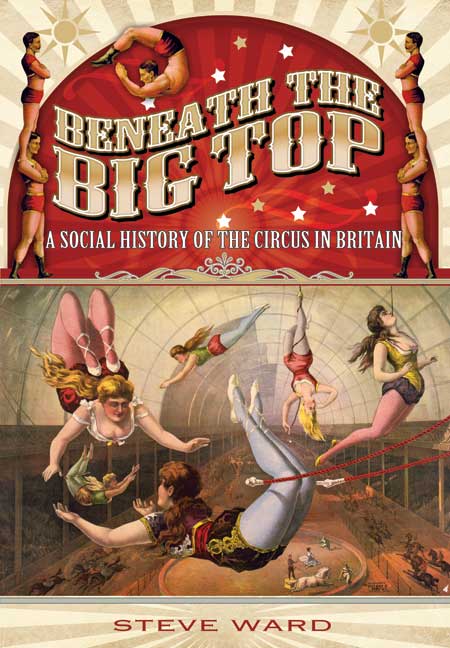 Beneath the Big Top (Kindle)

A Social History of the Circus in Britain

"Draws on eye-witness accounts and contemporary interviews to explore the triumphs and disasters of the ring. Contains some great photos too." - The Bookseller

Futher reading: author article on the 'Top 10 websites for tracing your circus ancestors' as featured online by WDYTYA?

You'll be £4.99 closer to your next £10.00 credit when you purchase Beneath the Big Top. What's this?
Need a currency converter? Check XE.com for live rates

Beneath the Big Top is a social history of the circus, from its ancient roots to the rise of the 'modern' tented travelling shows. A performer and founder of a circus group, Steve Ward draws on eye-witness accounts and contemporary interviews to explore the triumphs and disasters of the circus world. He reveals the stories beneath the big top during the golden age of the circus and the lives of circus folk, which were equally colourful outside the ring:

• Pablo Fanque, Britain's first black circus proprietor
• The Chipperfield dynasty, who started out in 1684 on the frozen Thames
• Katie Sandwina, world's strongest woman and part-time crime-fighter
• The Sylvain brothers, who fell in love with the same woman in the ring

Author article on discovering your performing ancestors as featured in

Article as featured in, on circus performers and tracing down ancestors who performed in it, Steve Ward's Beneath the Big Top mentioned in further reading

As a former circus performer and now teacher and circus professional I thoroughly enjoyed this book!! The Circus has such a rich history and Steve does an amazing job at not only chronicling it but also telling entertaining and wonderful stories throughout. The photos are also amazing!! I recommend this book for both circus professionals and also for everyone else…it is a fabulous read for all!!

As featured on BBC Radio Lincolnshire.

A welcome addition to the literature that is available on the subject. It also stands out for putting the circus performances in a wider social context and anybody new to the world of circus, once they read it, will be looking for more.

A smart, up-to-date chronicle of UK circus with a solid historical grounding. Ward is able to go into a depth that is often glossed over in other histories.

Beneath the Big Top is a valuable and illuminating read, shedding a lot of light on the political, economic and technological factors that have driven circus evolution in Britain throughout the years.

As featured on BBC Radio Leeds.

As seen in the Yorkshire Reporter.

This is a book written by a fan, and his love of the circus permeates every page of the book from his emotive introduction to his personal interviews with surviving circus performers such as Norman Barratt.
The glitter and sawdust is evocatively diplayed as are some of the key circuses of the past 200 years.
This is an enjoyable and entertaining romp through a difficult and overwhelming subject, one which is only just receiving the historical attention it merits.

Beneath the Big Top is a thorough review of the history of the Circus brought to life with contemporary anecdotes and illustrations. An entertaining and informative book.

Steve Ward’s new book ‘Beneath the Big Top; A Social History of the Circus in Britain’ conveys the author’s passion for circus and the detailed research he has undertaken. The quality of the writing, and the intriguing individuals involved in circus, results in a book that is a pleasure to read as well as an excellent source of information. A variety of excellent illustrations adds to the book’s appeal.

Steve Ward’s ‘Beneath the Big Top’ is a wonderful history of the circus world from the British viewpoint. For me, the best things a book can do are inform you, involve you and engage you. Steve has found a way to do all of these things in a book that is both full of interesting information and a great read. I didn’t want to put it down. Thanks Steve!

Exhaustively researched yet so very accessible. Steve Ward gives the reader a ringside seat in the greatest show of all. He is the ringmaster precisely directing our attention so we can see, know and feel how circus came down through the ages and remains a vital part of our culture.