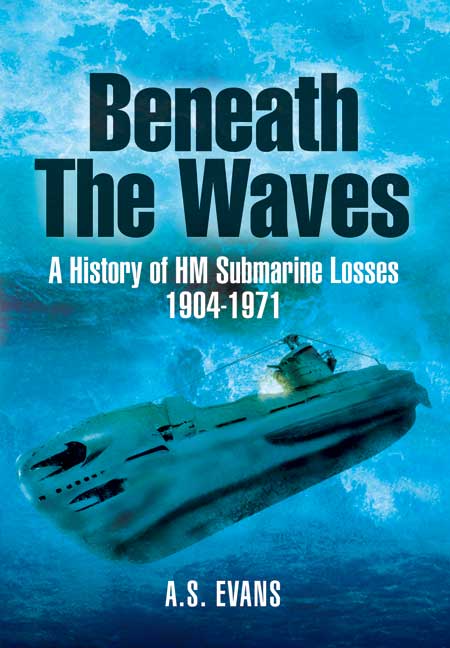 Beneath the Waves (Kindle)

Click here for help on how to download our eBooks
Add to Basket
Add to Wishlist
You'll be £4.99 closer to your next £10.00 credit when you purchase Beneath the Waves. What's this?
Need a currency converter? Check XE.com for live rates

Since the beginning of the Royal Navy Submarine Service in 1901, 173 submarines have been lost and in many circumstances with their entire crew. War inevitably takes a heavy toll: in World War Two alone – 341 officer and 2,801 ratings failed to return to harbour. The loss of personnel was roughly equivalent to the strength of the Submarine Arm at the outbreak of war.

Between the first loss, A1 in 1904, and the last, Artemis in 1971, lie many stories in which cool nerve was very much in evidence and one can marvel at the escape of the only survivor of Perseus; and of the sinking of Olympus from which the few survivors had to swim seven miles before receiving help; and of Surgeon-Lieutenant Charles Rhodes who died that others may live. These and many other accounts of submarine escape are described within this history – and whenever possible in the words of survivors or witnesses.

'The book is packed with detail for those keen to find out more about individual boats or crew members.'

Profusely illustrated with some remarkable photographs. The narrative flows in an engaging and readable way.

This is a reprint of the book first published in 1986. The text is exactly the same, including a few unimportant spelling mistakes. The illustrations are exactly the same as before, but they are grouped in two groups where they were originally in ten small groups, spread throughout the book.

As its sub-title suggests, the book could be a long sad list of facts, and indeed Appendix 1 is exactly such a list. The four columns show the Name or Number, the Date, the Name of the Commanding Officer and the Cause of Loss. The last column can be definate, for example, DC (Depth Charged) by Japanese Destroyer is definate, but so many of the others are either Presumed, such being the nuances of the English language. If there is to be a true account of any loss at sea, or under the sea, there must be something to examine such as a wreck or wreckage, or there must be a witness, preferably a survivor. Some of the stories such as the actions in the Sea of Marmora in 1915, have been told so many times that the reader can almost hear the nets scraping along the sides, as the submariners try to get through the anti-submarine boom to support the soldiers at Gallipoli.

The losses of HMS Thetis and HMS Truculent, although years apart, had a number of things in common. The country was not at war, the submarines were close to their bases and they each had civilians on board. The picture of the Thetis's stern out of the water in Liverpool Bay shown in this book was printed in newspapers all over the World. Surely we all thought, if the men in the whaler could touch the hull there must be something that could be done, but there was not.

The Truculent was returning to her base in Chatham Dockyard. At night, in the Thames Estuary, she was in collision with a merchant ship and sank. The resulting Inquiry showed that, although they had sighted one another's lights, neither party had understood exactly what was approaching/ This case is probably still being quoted to Rule of the Road students 60 years later.

Because of the amount of material evidence is so variable, this is a very difficult book to read through from beginning to end. It deserves a place in reference libraries where the index and appendices will soon direct the enquirer to whatever is known about a specific submarine's loss. There may be a considerable amount of history of the ship and the personal stories of some of the officers and men. It is the uneven distribution of this information that somehow makes each situation poignant. If one man's left a widow and two young children, how many of the others left families who are not mentioned?

This book is packed with detail for those keen to find out more about individual boats or crew members. A very useful and handy guide for reference and further research,