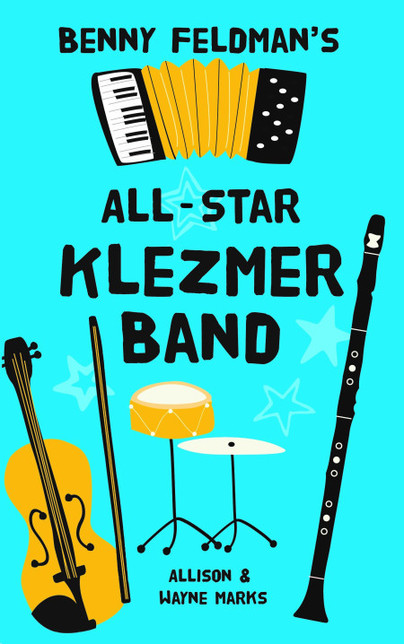 Click here for help on how to download our eBooks
Add to Basket
Add to Wishlist
You'll be £4.99 closer to your next £10.00 credit when you purchase Benny Feldman's All Star Klezmer Band. What's this?
Need a currency converter? Check XE.com for live rates

So when he signs up his klezmer band to play in the school talent show, his classmates are shocked. Teased by guitar superstar and former friend Jason Conroy, Benny vows to win the trophy and erase the embarrassing nickname that has haunted him since his disastrous debut performance in an first-grade Sabbath play.

But, there is a problem. Benny Feldman's All-Star Klezmer Band is only a figment of Benny's imagination. He loves the traditional klezmer music of Eastern Europe, but how is he going to find other players to join him?

With the show a few months away, Benny, an accomplished fiddler, embarks on a quest to assemble a band that will beat Jason's rock group at the talent show. His search takes him to an arcade convention, a potato chip factory, an oddities shop, and a storage room stacked with cans of creamed corn and succotash. Along the way he meets Jennifer, a jazz-loving drummer; Royce, a bow-tie-wearing clarinet prodigy; and Stuart, a braggart accordion player from Cajun Country. He also learns a great deal about the joys and sorrows that lie at the heart of klezmer and discovers that being different can be wonderful.

Eventually, the ragtag and renamed "Klez Misfits" mount the stage and the tension-filled climax will have young readers wondering until the end if Benny and his band can pull off a miracle.

This fun and feel-good story shows how friends, family, history and culture can all build confidence. Benny learns to believe in himself and has fun and finds love along the way.

Benny has tried to stay hidden in the shadows since an incident in a school play left him the butt of jokes and target of a school bully. On his own he plays violin and loves Klezmer music. One day though the teasing gets the best of him and he decides to sign up his band for the talent show. The problem is - he has no band. Can he find some new musicians to play with him and perhaps make new friends as well.
This was a breath of fresh air. Sometimes books for this age get really heavy and especially this year I needed something lighter.

This book was a love letter to music and friendship and I just enjoyed every minute of it. Benny is a very relatable character, anxious about not standing out but who still wants to be seen as interesting and cool by his peers. I really appreciated the range of friendships provided here - friends to enemies; brand new friends; cross-generational; established friendships with growing pains. The familial relationships were top notch as well. I just loved Uncle Maxwell and the Moshe stories. All in all, this was a great story that I think is gonna have a broad appeal.

A very fun story that I would be happy to recommend to middle grade readers.

Benny Feldman typically blends into the background at school to avoid embarrassment and teasing from his classmates, especially Jason Conroy, so he shocks himself and everyone else when he signs his band up for the school talent show. The only problem is that he doesn't actually have a band, so now he has to find people to play with and overcome his stage fright before the event so he can beat Jason's band and finally move past the embarrassing nicknames from his childhood.

Benny and his friends were great, and I loved how they all came from separate music backgrounds but found connection through klezmer, traditional Jewish music from Eastern Europe. Benny is very close with his family and frequently seeks out his uncle for advice- which typically comes in the form of stories about Moshe, Benny's great-great grandfather and fellow fiddler.

I think middle grade readers will connect with Benny and his story.

You'll fall in love with Benny and his band of misfits, feel indignant on his behalf, and eventually find yourself coming to understand multiple perspectives...including some that are a surprise! We will be using this book in our classroom as the jumping off point for studying Klezmer music with our Jewish studies.

I loved the idea of a children's book that features an 11 year old who plays klezmer violin. I don't know of any other book that brings klezmer into the classroom like this, so kudos to the author for picking this subject matter. Benny is an awkward boy who lacks confidence in himself and his actions and thoughts. But he's also a unique kid with a lot of appeal to certain other kids. And he's desperate to change his perceived reputation and that causes him to make some bold moves.