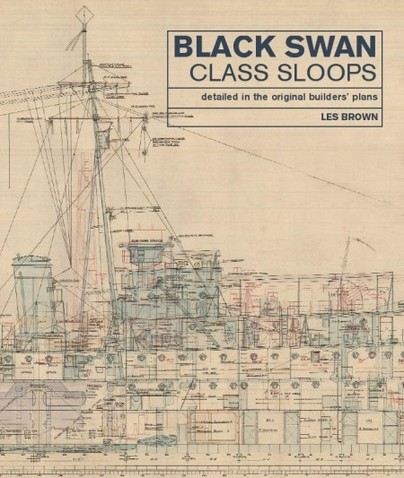 Click here for help on how to download our eBooks
Add to Basket
Add to Wishlist
You'll be £15.59 closer to your next £10.00 credit when you purchase Black Swan Class Sloops. What's this?
Need a currency converter? Check XE.com for live rates

Black Swan Class Sloops is a well-produced, high quality book that maintains the high standards being set by an innovative and highly informative series.

The drawings themselves are marvellous examples of the draughtsman’s art, and those that show later modifications in red are still beautifully clear and precise. The book isn’t all line drawings and plans. The opening chapter traces the development of the Black Swans from the early sloops of the 1030s, and there is some coverage of the 2nd Escort group and the Yangstze incident. However, this isn’t a book about technical aspects of the class, armaments, radar etc, but if you want to really get a detailed look at a 1940’s classic warship design, then this is the book for you. Once you have opened this book you are literally drawn into shipborne life – sit back and enjoy.

This is a more than worthy addition to Seaforth Publishing’s As Detailed in the Original Builders Plans series. It covers a very important and significant class of Royal Navy warships during World War II, it is glorious in its appearance, and it is amazingly informative. Anyone with the slightest interest in escort ships from this period needs to add it to their library immediately.

This well-produced book is ideal for those fascinated by Second World War escorts as well as model makers, artists and those who enjoy studying the minutiae of ship plans. Good value for money and recommended.

This series of books is in fact very useful not only to historians and enthusiasts but also to modelers because it carefully describes the different details between the various ships and even between the same ships at different times. Another beautiful book published by Seaforth Publishing.