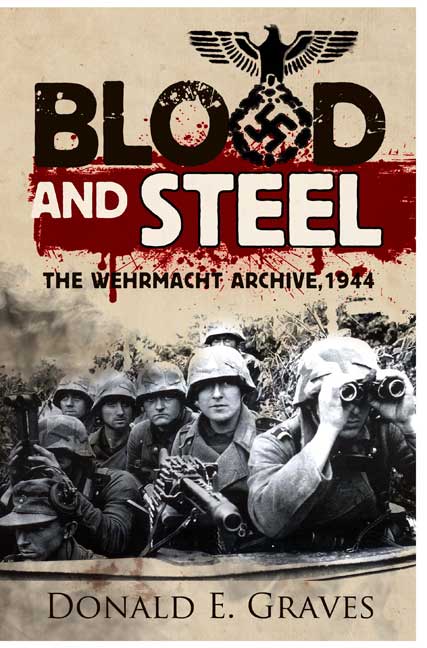 Click here for help on how to download our eBooks
Add to Basket
Add to Wishlist
You'll be £4.99 closer to your next £10.00 credit when you purchase Blood and Steel. What's this?
Need a currency converter? Check XE.com for live rates

Ordered by Hitler 'to hold, or to die' and to fight 'to the last grenade and round', the German army was a formidable opponent during the 1944 Normandy campaign. This book depicts the experience of that army in Normandy through its own records and documentation.

Blood and Steel, The Wehrmacht Archive : Normandy 1944 is an informative and colourful collection of translated original orders, diaries, letters, after action reports, and even jokes, as well as Allied technical evaluations of German weapons, vehicles and equipment and transcripts of prisoner of war interrogations. The translations also feature comments from wartime Allied intelligence officers which provide an insight into how the German army was regarded by its opponents at the time.

As you read the landser''s letters to wives and families in Germany, his forbidden diaries, his gripes about food, officers, and shortages of just about everything, the daily life of the German soldier in the long and bloody summer of 1944 will come to life. You will also learn from official documents about his superiors' efforts to cope with Allied air and artillery superiority, create new tactical methods for all arms and maintain discipline in the face of overwhelming odds with both exaggerated claims of miraculous new 'Vengeance Weapons' and threats of the ultimate sanction for desertion or surrender.

This is a fascinating collection of documents, providing a really valuable view of the German army during the battles in Normandy.

A fascinating miscellany of information about the composition, training and employment of the Wehrmacht during the Battle of Normandy, drawing upon German unit war diaries, operation orders, personal accounts, and Allied intelligence summaries. These take up the larger part of the narrative and give an insight into the German tactical mindset and the methods they employed to meet the invasion and sap its momentum. It highlights the great skill of the German soldier, but it also reveals his lack of air support and deficiencies in terms of artillery and armour; all of which the Allies had in abundance and did not hesitate to make full use of. Later chapters focus on specific aspects, including training, difficulties of supply, problems of low morale, and reports of tensions between themselves and the SS. To anyone who only knows the Battle of Normandy from the Allied perspective, this book is crammed with revealing information.

A fine collection of documents. A fully-rounded portrayal of the Wehrmacht in Normandy.

Whenever we think of the events in Normandy 1944, it is generally from the point of view of the victors. What makes this book different is that it tells the events from the German viewpoint - and in their own words. Virtually the entire book comprises copy documents, and the words of German soldiers caught up in the conflict. There are translated original orders, diaries, letters, after action reports as well as comments from wartime Allied intelligence officers. Although the soldiers were officially forbidden to keep diaries, many of them did, and it brings their concerns and worries vividly to life. Reading the book you can see the varying points of view, and how the two armies were regarded by each other. At times there is almost a sense of panic among the Germans, unsure as to when they were going to get fuel and food. Yet despite this, what is most surprising is the confidence that many of the German officers and soldiers had that they would recapture all the land they were losing to the Allies. They were still searching for new military tactics which might give them some advantage. Admittedly, part of that confidence does reflect their knowledge that desertion or surrender may result in their death at the hands of their own forces. An unusual, and well created book, that is justly described as a 'treasure trove of information for historians, wargamers, re-enactors and modellers'. 4 stars