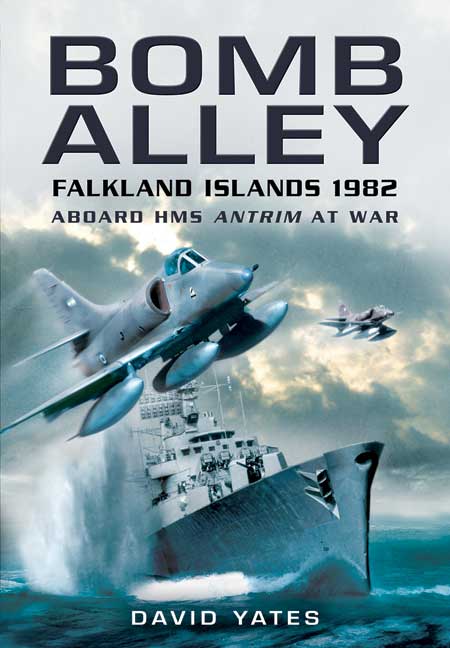 Click here for help on how to download our eBooks
Add to Basket
Add to Wishlist
You'll be £4.99 closer to your next £10.00 credit when you purchase Bomb Alley - Falklands Island 1982. What's this?
Need a currency converter? Check XE.com for live rates

This is the untold story of the Falklands War as experienced by a below-decks seaman on one of the most important ships to be despatched to the South Atlantic. It is a no-holds-barred account as seen through the eyes of a Royal Navy matelot who shared the terror of the first encounter with Argentinean forces when South Georgia was retaken from the invaders in Operation Paraquat. Then HMS Antrim lead the first attack into the North Falklands Sound where she destroyed enemy defences and later became part of the main force anti-aircraft defences in the infamous 'Bomb Alley' or San Carlos Water. During one of the many air attacks the ship was struck by a bomb that destroyed her defensive missile system, but through pure chance the bomb did not explode and remained aboard wedged in the aft 'heads'. All around the stricken ship other RN vessels were taking extreme punishment from the almost continuous onslaught from low-flying Argentinean jets. HMS Antelope, HMS Coventry and the Atlantic Conveyer were all lost within a short period whilst the army was trying to establish a bridgehead.

The author has an easy writing style, a fascination for detail and the ability to describe the work-a-day life aboard ANTRIM in an interesting and almost conversational style. Most books about the Royal Navy are written by officers but this lower deck account offers an entirely different perspective which is worth its place on the bookshelf. A very good read.

Both highly amusing and interesting reading, especially when you contrast it with how we live and operate as a Navy in these times and how peoples values have changed. It is a warts and all account in many respects from a view point you don’t often get to hear and I think is this books unique selling point – there aren’t many similar books that are so honest about fudging accounts, nicking beer and stashing it in trunking and the like, equally there aren’t that many books where the author is so honest about the pressures they faced and their emotions as they prepare to experience modern warfare stuck in the bowels of a warship, or how something as simple as weeks old mail can set the chin wobbling.

In summary a good read, from a fresh perspective. This is easily more digestible than the long and overly detailed tomes produced by rafts of Senior Officers but is no less relevant and entertaining.

a gripping tale of heroism and raw adventure