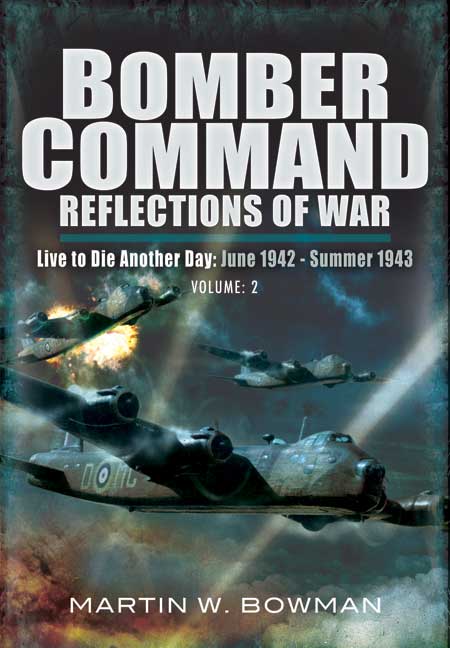 Click here for help on how to download our eBooks
Add to Basket
Add to Wishlist
Get Bomber Command: Reflections of War (Kindle) for FREE when you purchase 2 other eBooks.
Need a currency converter? Check XE.com for live rates

This is the second volume of a five part work that provides a comprehensive insight into all aspects of RAF Bomber Command in World War Two. Few campaigns waged from the summer of 1942 onwards continue to excite more hotly-contested debate than the bomber offensive against the Third Reich. It was a time of specialist innovations such as the Path Finders to mark targets and the Bomber Stream to control large numbers of aircraft over a target while at the same time overwhelming the enemy defences. By the start of 1943 two blind and bombing aids called ‘H2S’ and ‘Oboe’ were being installed in Bomber Command aircraft. Even in the face of heavy losses morale was sustained by the individual belief that he would not be the one to get the ‘chop’. Most every one of them was scared but outwardly none talked of ‘death’ or ‘dying’. It ‘couldn’t happen to them; they would complete a tour of thirty ‘ops’. The more fatalistic among them believed that they would get killed but not ‘today, tomorrow or the next day’. The personal qualities of the young men selected for aircrew duties - all of them volunteers - never compromised during the entire campaign. Their pulsating accounts offer a more personalised view of the war through the eyes of those who were there in the heat of the action and are complemented by the author’s background information that puts each narrative into wartime perspective, covering the night time raids on Germany, Italy and the occupied countries.

Time and again, this account of one year in the bombing campaign records the records the astounding personal qualities of the men – not just a select handful, but dozen upon dozen of them – who crewed the Halifaxes, Wellingtons and Lancasters.
With a generous selection of photographs, he uses scored of eye-witness reports to tell the stories of operations and of the men who flew out on them. Readers will learn about more general issues, improvements in technology and advances in methods. What grips attention, though, is the human aspect of this phase of the bomber offensive.

Martin Bowman needs no introduction to Association members. His latest book not only retains the factual information that we are so used to, but also his capability to enthral readers.
Martin is one of Britain’s best World War II authors and this is the latest of his publications maintains the standard that we expect from him. This book takes us into 1943 so we must look forward to the next volume to read of the exploits of our Charles Lofthouse on the Peenemunde raid.