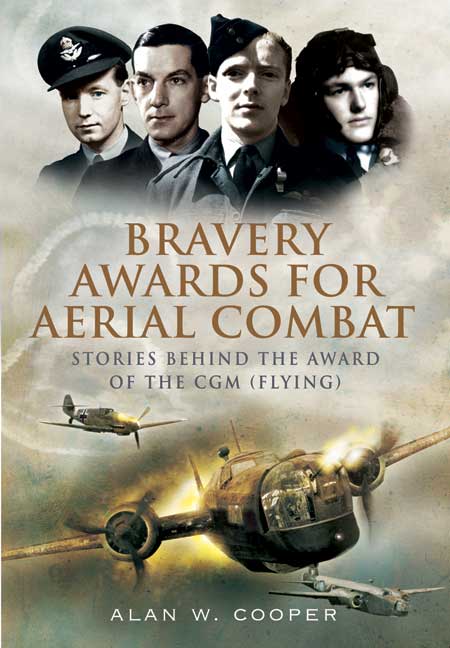 Click here for help on how to download our eBooks
Add to Basket
Add to Wishlist
You'll be £4.99 closer to your next £10.00 credit when you purchase Bravery Awards for Aerial Combat. What's this?
Need a currency converter? Check XE.com for live rates

The Conspicuous Gallantry Medal (Flying) was instituted in November 1942 to right the anomaly that no award existed for non-commissioned aircrew between the DFM and the VC, or in other words - an equivalent to the DSO for commissioned officers. Only 110 CGMs were awarded and this book describes the events and personalities of many of those whose bravery in combat led to the award of this very rare medal. The first recipient was Flight Sergeant Leslie Wallace, a wireless operator with 83 Squadron, who extinguished a major fire in his Lancaster and despite his severe wounds returned to his radio until the crippled aircraft returned to England. The final CGM was awarded to Flight Sergeant John Couglan in Vietnam, when he assisted boarding casualties in the face of heavy fire from the Vietcong. In between there are a host of tales that recount incredible feats of courage. Lengthy appendices list recipients of the medal and other statistics concerning the award.

n short, this exciting and interesting book does what its sub-title says. It details the heroic actions of Non-Commissioned Officers (NCOs) and airmen who were awarded this highly regarded medal – the flying version of the Conspicuous Gallantry Medal (CGM). To date there has only been 112 awardees since its inception in 1942 and the most recent bestowal was during the Vietnam War.

The CGM was originally instituted during Queen Victoria’s reign (1855) and it was to recognise bravery by the NCOs of the Royal Navy (RN) and the Royal Marines (RM). The army had the Distinguished Conduct Medal and the newly introduced CGM was the RN’s & RM’s equivalent to the DCM. After WW1 significant numbers of personnel from the newly formed Royal Air Force (RAF) were attached to the Royal Navy’s Fleet Air Arm. Thus, at the outbreak of WW2 an anomaly existed in the gallantry award system.

By 1942 acts of heroism within the NCO ranks of the RAF generated a need for an identifiable token of recognition for their gallantry. Hence the CGM (Flying) was introduced. The Royal Warrant (10th November 1942) made it available to “army and RAF personnel whilst flying in active operations against the enemy”.

The initial awards of the CGM (Flying) are covered in Chapter 2 of the book. The first award to Flight Sergeant Leslie Wallace (actually a New Zealander) is covered in detail and so too are the other initial awards. There are particulars of VC Recommendations which were reduced to the CGM and all these men’s heroic deeds are fascinating to read.

There are chapters devoted to awardees from Bomber Command and Coastal Command. Like a number of other decorations the CGM could be awarded for a number of actions or for a period of continued gallantry of a high order as well a being for the (immediate) specific feats of bravery. There were 10 men of Bomber Command who were thus honoured with non-immediate CGMs. There are details of the awards for the Middle Eastern and Italian campaigns as well as many other theatres of operations.

At the rear of the book there are a number of useful appendices containing the roll call of recipients of the CGM (it details awardees’ names, ranks, squadron, type of aircraft flown and the date of the award), a breakdown of awards by crew category and Force (e.g. RAF, Australian, Canadian Air Force etc), other gallantry awards to CGM holders, awards to aircraft types used and a squadron breakdown.

To summarise this book notes the actions of these gallant men and it does justice to their memory. The author has done an outstanding piece of research and he brings these gallant deeds to life. It is the sort of book that once you start reading it you will find that it is impossible to put it down until you have reached the last page.