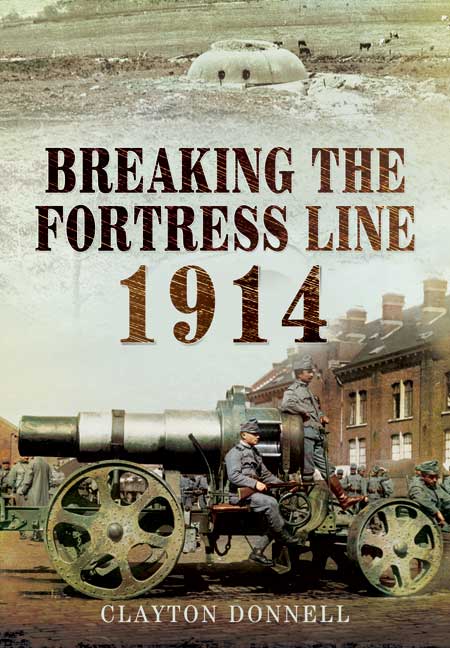 Click here for help on how to download our eBooks
Add to Basket
Add to Wishlist
You'll be £4.99 closer to your next £10.00 credit when you purchase Breaking the Fortress Line 1914. What's this?
Need a currency converter? Check XE.com for live rates

Breaking the Fortress Line 1914 offers a fascinating new perspective on the German offensive against France and Belgium in 1914. In graphic detail it describes the intense fighting that took place around the forts and fortified cities that stood in the path of the German invasion. The ordeal began with the German assault on the mighty fortress of Liège. They took twelve days to batter their way through the 'Gateway to Belgium', losing thousands of men in repeated frontal assaults, and they had to bring up the heaviest siege artillery ever used to destroy the defences.

This is the epic struggle that Clayton Donnell depicts in this compelling account of a neglected aspect of the battles that followed the outbreak of the Great War. Not only does he reconstruct the German attack on the strongpoints they encountered along the entire invasion line, but he traces the history and design of these fixed defences and analyses the massive military building programmes undertaken by the French, the Germans and the Belgians between 1871 and 1914.

Thousands of huge forts, infantry strongpoints, bunkers, casemates and shelters were dug out along the French and German borders. The German Moselstellung and Steinbruch-stellung were born. These massive concrete fortress systems with steel gun turrets and diesel motors to generate electricity were a completely new concept of fortress design.

As war approached, France and Germany devised plans to overcome each other's powerful armies and these border defences. The French plan avoided contact with the German fortress system. But the Kaiser's army faced twelve forts at Liège, nine more at Namur, and then the strongpoints of the first and second Séré de Rivières lines. Clayton Donnell provides a gripping narrative of the violent confrontation that followed.

Clayton Donnell's book is one of those rare works that reports the facts without embellishment or generalities.

Whilst the centenary of the 1914 campaigns passed by with barely a mention in the mainstream media of the actual campaigns and battles fought, a number of books have been published that look at the opening stages of the war.

Most of those with an interest in the war will be familiar with the opening stages of the British campaign including the Battle of Le Cateau, the Retreat from Mons, the Battle of the Aisne and the start of trench warfare during First Ypres. Yet the very first actions of the war, when the Germans attempted to sweep through Belgium and France, prior to British involvement, have been largely overlooked in the UK. Clayton Donnell’s book seeks to address this by providing an account of the initial German advance.

Both Belgium and France had constructed extensive networks of forts during the late 1800s, and it was these that posed a risk to the flanks and rear of the advancing German army. Many of the forts had been modernised due to the advances made in the explosive power of shells, which rendered the existing structures near-useless. In a vicious cycle, as the defences became thicker or more impenetrable, the guns needed to breach these defences became bigger. Armour plating was introduced to try and afford some level of protection to the static guns and their crews that would previously have been sited on open ramparts.

In the initial war of movement the attempts to destroy these fortifications stand out; a juxtaposition of the centuries old techniques of siege warfare with the use of modern, destructive firepower. Whilst most of these forts were overrun by the Germans in 1914, this type of warfare would be seen again in 1916 at Verdun as the French utilised the ring of forts surrounding the symbolic town; the forts required large numbers of men and artillery to attack them, which diverted resources from the main German advance.

Appendices include a handy chronology, brief details of Germany’s heavy siege guns, and a study of the fall of the forts of Liege. The book is comprehensively referenced, and has a large number of fantastic photographs, both contemporary and modern.

A useful book, providing valuable detail on and analysis of sieges long forgotten but critical in the early weeks of the war. I couldn't help but think the failure of these forts, and the bloodletting at the forts in Verdun in 1916, is what led France to build the wildly expensive and largely underground Maginot line in the 1930s. For with huge guns the Allies knew nothing about, the Germans systematically reduced the fortresses, often burying their defenders in rubble. But that took days--time the German plan of invasion didn't account for. The eventual result was the horrific trench war stand off on the Western Front from late 1914 to war's end four years later.

While most books devoted to the opening operations on the Western Front in 1914 cover the rapid movement of troops through Belgium into France emphasizing a few major battles up to the Marne, this work covers the main obstacles that delayed the German advance and even contributed to the failure of the German plan. These obstacles consisted of the forts and fortress rings on the German line of advance that hindered logistical support until eliminated. Coverage includes the German assault and reduction of the three fortress rings of Belgium and the French frontier fortress of Maubeuge and the forts at Givet and several other locations. Also included is the Germans first attempt to take Verdun by striking the forts south of the fortress ring at St Mihiel. The detailed descriptions of German actions against the Belgian and French forts are found in few books written in English, especially the operations against the French forts.
Those interested in fortifications on the Western Front in the Great War and a detailed account of what happened to them in 1914 will find this book a must read.

“Breaking the fortress line” sets a high standard for military history. It deals with the development, fighting for and ultimately the defeat of the many fortresses constructed in France and Belgium in the decades prior to 1914, with particular emphasis of Liege, Namur, Maubeuge and Antwerp but with many of the other fortresses also covered. It is clear that research has been deep and has examined the viewpoint of France, Belgium and Germany, and the narrative is rich in detail. This will prove to be a valuable work of reference as well as a good read.

A brilliant piece of work and very welcome.