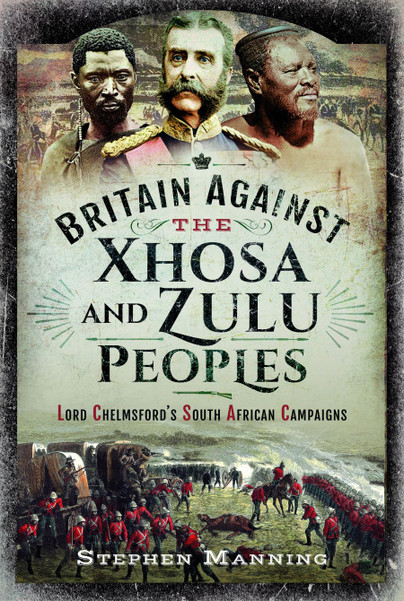 Britain Against the Xhosa and Zulu Peoples (Kindle)

Click here for help on how to download our eBooks
Add to Basket
Add to Wishlist
You'll be £9.98 closer to your next £10.00 credit when you purchase Britain Against the Xhosa and Zulu Peoples. What's this?
Need a currency converter? Check XE.com for live rates

Britain’s war against the Zulu people of southern Africa in the late nineteenth century is one of the most famous clashes in the history of the British empire, but her earlier wars against the Xhosa, also in southern Africa, are far less well known. And, although the role Lord Chelmsford played in the Anglo-Zulu War has been recounted in exhaustive detail, his earlier experience against the Xhosa has rarely been explored in the same intensive way. That is why Stephen Manning’s absorbing study of these colonial campaigns and Chelmsford’s part in them is so timely and valuable.

Chelmsford’s military career and Britain’s troubled relationship with the Xhosa people came together in 1878 with the conclusion of the 9th Frontier War, in which Chelmsford commanded the victorious British forces. This conflict is vividly described here. Perhaps Chelmsford learned the wrong lessons from his struggle with the Xhosa because his initial handling of British forces during the Anglo-Zulu War resulted in disaster at the Battle of Isandlwana. Although Chelmsford regained the initiative and his forces defeated the Zulus at Gingindlovu and Ulundi, his reputation never recovered.

Stephen Manning’s account of Chelmsford’s South African campaigns gives us a fascinating insight into the military and political history of southern Africa in the period and provides a fresh view of Chelmsford himself – as a man of his time and as a military commander.

I’m certainly no history expert, but this text seems to be balanced and well researched, and the author puts it all together in an easy-to-read and engaging style. Once again, taking ‘pot-luck’ on the books on offer has paid dividends for me. I am slowly, but steadily, adding to my knowledge of history. - Something my history teachers said I would never do!

In-depth knowledge, well-researched, and a non-nonsense approach to this interesting subject. I would recommend it to anyone interested in the subject, and to the readers who already know something about this subject, since it gives such detailed information that it might be a bit too much if you are completely new to this subject. However, if you know the basics about this subject, this will be an excellent read for you, and you will gain a lot of new knowledge!

I would recommend it as a good jumping off place for a closer examination of the wars in South Africa and as a very useful overview of a military and diplomatic situation quite typical of those that occurred in the late nineteenth century British Empire as it evolved away from its earlier foundations.